Ah, the bad guys–a film just isn’t as complete unless there is at least one person to root against. But an all-time best list of baddies isn’t as easy to come up. You have to weed out the crazies (Glenn Close in Fatal Attraction), the inhuman monsters (Michael Myers in Halloween), the misunderstood (Blade Runner)–and yes, even the plethora of animated evilness–and truly enter the Heart of Darkness. Here’s our top 10 list of the purely evil:

10. The Joker (Heath Ledger), The Dark Knight
OK, to be fair, Ledger’s totally creepy, absolutely mesmerizing performance as Batman’s nemesis The Joker, the ultimate anarchist, should probably rank higher on this list, but it’s still so fresh in our minds, it needs to settle a bit with time.
Most Villainous Line: “Do you wanna know why I use a knife? Guns are too quick. You can’t savor all the…little..emotions. And..you see..in their last moments…people show you who they really are. So, in a way, I know your friends better than you ever did. Would you like to know which one of them were cowards?”

9. Hans Gruber (Alan Rickman), Die Hard
Rickman’s Hans is our choice for the most diabolical two-bit criminal. He’s really only in it for the money, all $600 million of it, but he does rather enjoy tormenting his captors–until he comes across big, bad John McClane. Guess Hans didn’t figure on “Mr. Cowboy.”
Most Villainous Line: “When they land we blow up the roof, they spend a month sifting through rubble, and by the time they work out what went wrong, we’ll be sitting on a beach, earning 20 percent.”

Technically, Stansfield is tad more on the psychotic side (see above criteria), but it’s the way Oldman plays the corrupted cop that chills us–from sniffing whatever that stuff he carries around with him up his nose, to his obsession with Beethoven, to shooting a little boy. He’s actually pretty sane when it comes to his mayhem. Shiver.
Most Villainous Line: “It’s always the same thing. It’s when you start to become really afraid of death that you learn to appreciate life. Do you like life, sweetheart?”

Come on, he’s got “evil” in his name! You’ve got to include Dr. Evil, even if he isn’t nearly as terrifying as he’d like you to think he is. Being that he was has been partially frozen for 30 years, throw him a friggin’ bone, will ya?
Most Villainous Line: “Ladies and Gentlemen, Welcome to my underground Lair. I have gathered here before me the world’s deadliest assassins, and yet, each of you has failed to kill Austin Powers. That makes me angry, and when Dr. Evil get angry, Mr. Bigglesworth gets upset, and when Mr. Bigglesworth gets upset people DIE!” 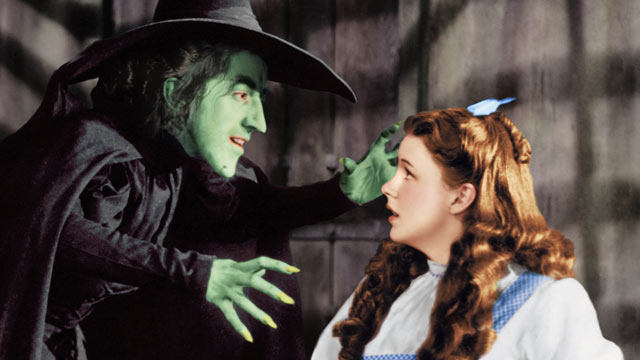 6. Wicked Witch of the West (Margaret Hamilton), The Wizard of Oz
[Cue the Witch’s theme song] Remembering the first time you saw The Wizard of Oz, it’s that image of the Wicked Witch’s green pointy face you can’t get out of your head–cackling at her crystal ball while her minion of flying monkeys stood by, waiting for her command (the character’s redemption in the musical Wicked doesn’t count, by the way).
Most Villainous Line: “The last to go will see the first three go before her. And her little dog, too.”

Fiennes has played a few evil men in his acting career (his Nazi colonel in Schindler’s List almost made the cut), but it’s his He Who Should Not Be Named, the Dark Lord–or as I like to call him, ole Snake Face–who really stands out as the best of the baddies.
Most Villainous Line: “Astounding what a few drops of your blood will do, eh, Harry?”

Perhaps we thought we’d seen every kind of assassin there was–boy, were we wrong!  Oscar-winning performance as the cold-blooded Anton, whose single-minded determination to follow through on every job to its very end, is bone-chilling. Made even more so when he occasionally gives his victim’s a 50-50 chance by the flip of a coin.
Most Villainous Line: “Call it.”

3. Nurse Ratched (Louise Fletcher), One Flew Over the Cuckoo’s Nest

In those horrifying visions of a psycho nurse coming at you with a large hypothermic needle, the name that comes to mind is Nurse Ratched. Fletcher’s portrayal isn’t so much maniacal as it is sadistic as she thoroughly gets off on keeping her mental patients right there next to her, crazy as ever.
Most Villainous Line: “You know Billy, what worries me is how your mother is going to take this.”

Nothing can top Hopkins’ Hannibal. OK, maybe one villain can top him , but as far as cannibalistic serial killers are concerned, Lecter takes the cake. Bet you can’t say Chianti and fava beans the same way.
Most Villainous Line: “I do wish we could chat longer, but… I’m having an old friend for dinner.”

And our No. 1? Yes, it’s Lord Vader. He personifies all that is dark and evil in The Force. When you see how he gets to be the way he is, you have to empathize, just a little–and of course, his salvation at the end is sweet. But honestly, folks, it’s hard to forgive all the other mean stuff he did.

Most Villainous Line: “I find your lack of faith disturbing.”