Vikram Seth – All You Need To Know.

Lauded for his versatility, Seth has experimented with such forms as the verse novel in The Golden Gate (1986) and produced works in prose and poetry that remark on such diverse places as China, California, and India. Critics have praised his wit and humor and his ability to evoke a sense of the cultures about which he is writing.

Born in Calcutta, India, Seth spent part of his youth in London. Returning to his homeland in 1957, Seth received his primary and secondary education in India. He then studied philosophy, politics, and economics at Corpus Christi College, Oxford, where he developed an interest in poetry and learned Chinese.

After leaving Oxford, Seth moved to California to work on a graduate degree in economics at Stanford University. There he met poet Timothy Steele, who profoundly influenced his work—Seth later dedicated his verse novel, The Golden Gate, to him. Seth also spent two years at Nanjing University in China.

While there, he published his first collection of poetry, Mappings (1980), and hitchhiked across China and Tibet to India, a journey recounted in From Heaven Lake (1983), for which he received Britain’s most prestigious travel-writing award, the Thomas Cook Prize. Eventually returning to Stanford, Seth took a break from his graduate work to write The Golden Gate, which he followed with another collection of poetry, a book of animal fables, and the prose novel A Suitable Boy (1993), for which he spent eight years in New Delhi writing and researching.

From Heaven Lake is a travelogue describing Seth’s experiences on a trip from Nanjing University to his home in Calcutta via Tibet. Rather than merely discussing places to stay or sights to see, he demonstrates the value of cultural adaptability and sensitivity as he describes the land, the people he met, and the fragility of Tibet’s cultural heritage in the wake of China’s Cultural Revolution.

His next work, the poetry collection The Humble Administrator’s Garden (1985), centers on Seth’s life in India and his experiences as a student at Oxford, Nanjing, and Stanford. Claude Rawson noted that the poems are “observant of pathos, of ironies of behaviour, and of the unexpected small exuberances of life.” Modeled after Alexander Pushkin’s Yevgeny Onegin (1833; Eugene Onegin), The Golden Gate is a verse novel composed of nearly six hundred sonnets written in iambic tetrameter. Set in San Francisco, California, during the early 1980s, the story centers on the interactions of three young professionals and their friends and explores issues related to religious guilt, the nuclear arms race, sexuality, love, and death.

One of the longest books ever written in English, A Suitable Boy has drawn favorable comparisons to the novels of Jane Austen, George Eliot’s Middlemarch (1872), and Salman Rushdie’s Midnight’s Children (1981). Set in India during the early 1950s, the story centers on two characters: Lata Mehra, for whom her mother actively seeks a husband; and Maan Kapoor, who is searching for meaning in his life. The novel, however, is considered more than an exercise in character study; containing numerous subplots, it provides a vivid and lavishly detailed portrait of India’s diverse society and culture. 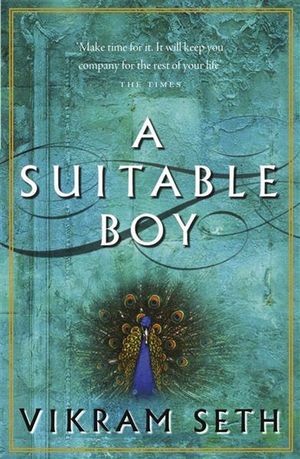 Critics have commended Seth’s sensitivity to Chinese culture in From Heaven Lake and his ability to accurately convey that culture to readers. The Golden Gate elicited enthusiastic critical response, with commentators praising it as a work of technical virtuosity suffused with wit and accessible language that moves from elevated literary allusion to colloquial speech. Although a number of reviewers have argued that Seth overemphasized rhyme to the detriment of the story’s depth and character development, The Golden Gate is generally regarded as a bold achievement at a time when strict adherence to meter and rhyme goes largely unheeded by most poets.

D. J. Enright commented: “The Golden Gate is a technical triumph, unparalleled (I would hazard) in English. We may not have scorned the sonnet, but we shall hardly have thought it capable of this sustained sequentiality, speed, elegance, wit and depth of insight.” David Lehman concurred, arguing that in The Golden Gate “Seth makes us care about his characters, proposes a moral criticism of their lives and captures his California setting with a joyous wit little seen in narrative poetry this side of Lord Byron.” Critical reaction to A Suitable Boy has been mixed. Numerous reviewers have found the length burdensome and the wealth of detail overwhelming in comparison to what they regarded as the slightness of the story’s insight and dramatic action.

Rhoda Koenig, for instance, has argued that A Suitable Boy‘s depth “may not trouble readers who seek nothing more than the acquaintance of some agreeable characters and a travelogue of postcolonial India. Those, however, who want to be rewarded with some insight, drama, and artistry … may feel that ‘quite pleasing’ is an insufficiently enticing justification.” Most commentators, however, have praised the novel for providing an in-depth treatment of Indian culture.

Commenting on the writing in A Suitable Boy, Schuyler Ingle stated: “It is absolutely seamless. There are no impediments placed between the reader and the story and the intimate lives of the characters. The reader’s immersion in Indian life is so complete that by the time A Suitable Boy comes to its successful conclusion, aspects of Indian life that seem exotic—like the idea of arranging a marriage for a daughter—make perfect sense to a Western reader.