Holiday in New York: Your guide to New York, USA

The “Big Apple,” the “City That Never Sleeps” – New York is a city of superlatives: America’s biggest; its most exciting; its business and cultural capitals; the nation’s trendsetter. The city seems to pull in the best and the brightest from every corner of the country. With a globally recognizable skyline and 8.3 million people who call it home, New York City is bursting with diversity and excitement. Each of the five boroughs has a distinctive flavor, while individual neighborhoods maintain identities all their own.

For the many immigrants who flocked from Europe to New York, the Statue of Liberty was the first image they saw of the USA. The statue was a gift from the French government for the 100th anniversary of America’s Independence.

The statue’s face was modeled after his mother’s and the story goes that the body was modeled after a prostitute. The crown of Lady Liberty, as the statue is often affectionately called, has seven spikes, symbolizing the Seven Seas across which liberty should be spread. In her left hand she holds a tablet with the Declaration of Independence and in her right hand a torch, symbolizing Enlightenment.

The Statue of Liberty is 46,5 meters (151ft) tall and together with the pedestal it reaches a height of 93 meters (305ft). You can take the staircase inside the statue and walk all the way up the 354 steps to the crown from where you have a nice view over New York City. Wall Street is one of the world’s most famous streets. Historically known as the center of New York’s financial district, Wall Street is often associated with wealth and ambition in America.

One of the Financial District’s most famous symbols is the ‘Charging Bull’ Statue (The bull represents a bull market, a constantly rising market).

Inspired by the stock market crash in 1987, sculptor Arturo Di Modica created the 7,000-pound (3175kg) bull statue as a token of optimism. In 1989 he placed it – without authorisation – in front of the New York Stock Exchange in Wall Street. Police removed the statue but thanks to a public outcry it was reinstalled, but this time on Bowling Green, a small square annex park near Wall Street. The statue has become one of Lower Manhattan’s most popular attractions.

The Brooklyn Bridge, built between 1869 and 1883, connects Manhattan with New York’s most populous borough, Brooklyn. The bridge is one of the most famous and magnificent landmarks in New York City. The Brooklyn Bridge ranks as one of the greatest engineering feats of the 19th century and remains one of New York’s most popular and well known landmarks.

The impressive bridge spans the East river between Brooklyn and Manhattan and stretches for a length of 5989 ft, about 1.8 km. The span between the large towers measures 1595.5 ft (486 meters). This made the Brooklyn Bridge the world’s largest suspension bridge.

An elevated pedestrian path not only gives you the opportunity to cross the river without being bothered by the traffic that rushes past a level below, but it also offers a great view of the bridge’s towers as well as downtown Manhattan’s skyline. The views alone attract millions of visitors to this bridge each year.

A famous bustling and colourful intersection in central Manhattan and home of the legendary New Year’s Eve Ball Drop. Known for its many Broadway theatres, cinemas and electronic billboards – it is one of those places that make New York a city that never sleeps.

More than any other building in the world, the Empire State Building represents the ambition of humans to build towers that reach for the skies. The skyscraper is probably New York’s best known building and can be seen on many postcards.

Though the building has been stripped from its title of the world’s tallest building, it is a symbol of New York itself, visited by more than three million people each year.

The Empire State Building is situated south of Midtown, away from the skyscraper clusters in midtown and in the financial district downtown, so this is one of the few places in Manhattan where you have an open 360 degree view. 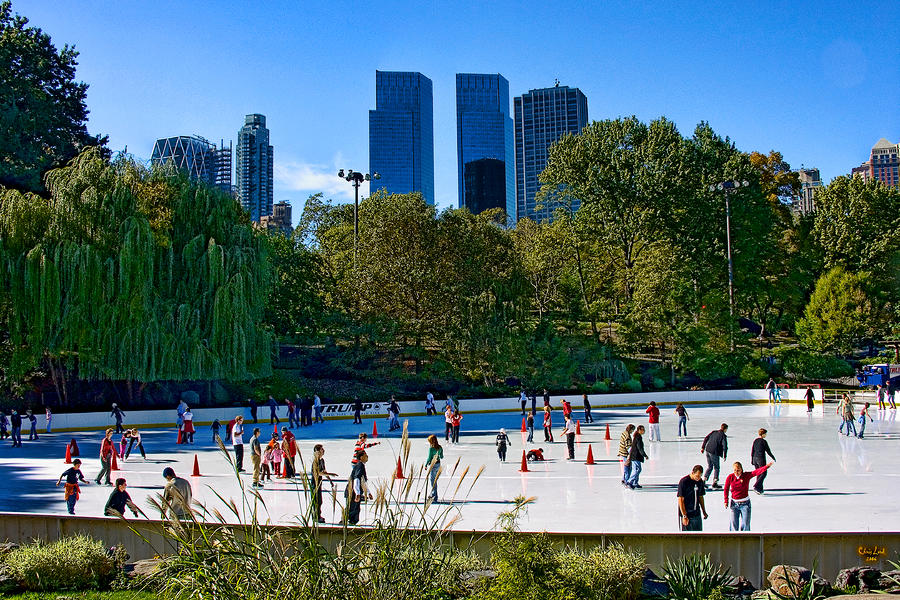 Central Park is one of those places that make New York such a great place to live. The huge park, 341 hectare large (843 acres), is located in the center of Manhattan. Its design has served as an example for city parks around the world.

The park boasts several lakes, theaters, ice rinks, fountains, tennis courts, baseball fields, many playgrounds and other facilities. It is also home to the Central Park Zoo and the Metropolitan Museum of Art. Especially during the weekends, when cars are not allowed into the park, Central Park is a welcome oasis in this hectic city. 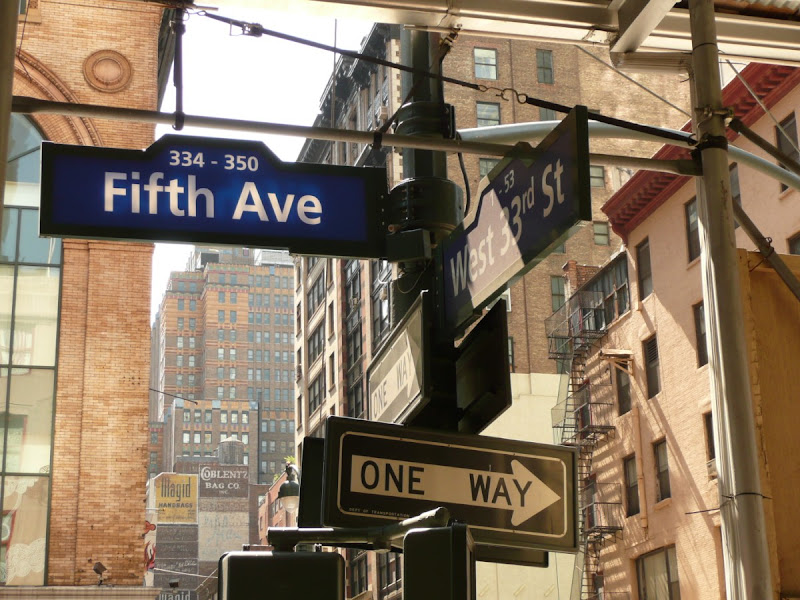 New York’s Fifth Avenue is best known as an unrivaled shopping street. Almost any upscale retailer has a prestigious store located at this street. However not all of Fifth Avenue is shopping-centric. Along Central Park Fifth Avenue becomes a more residential street with a large number of interesting museums.

Fifth Avenue starts just north of Washington Square and goes all the way north up to 143rd street in Harlem. It is one of the world’s most expensive streets, especially the area between 49th and 59th street where some of the most prestigious stores can be found.

The National September 11 Memorial commemorates the victims of the terrorist attacks on the World Trade Center. The memorial opened on the tenth anniversary of the attacks at the site of the former twin towers of the WTC.

An underground museum opened to the public on May 21, 2014. The museum, which was designed by the architectural firm DBB, assesses the implications and impact of 9/11. The museum is entered through a glass pavilion created by Snøhetta, an international design firm best known for its design of the opera house in Oslo, Norway.

Multimedia displays and artifacts from the Twin Towers spread around 110,000 sq. ft. (10,000 sq.m.) of exhibition space tell the story of the attack and its impact.

The headquarters of the United Nations in New York were developed by an international team of architects. The main building, the Secretariat, was one of the city’s first skyscrapers in International Style.

The largest of the four buildings is the Secretariat building, home of the UN’s administration. The large, 39 story, 544 ft (166m) tall slab has become a worldwide symbol of the United Nations. The green glass-curtain tower, the first of its kind in New York, contrasts starkly with the 1920s buildings of Tudor City nearby.

Along First Avenue in front of the United Nations Headquarters is a display of flags from each member of the UN. It starts with Afghanistan at 48th street and ends with Zimbabwe at 42nd street.

Million and millions of people have flocked through the doors of Madame Tussauds London since they first opened over 200 years ago. Madame Tussauds opened its doors in the heart of Times Square in New York City in the year of 2000.

Today visitors are sent on a unique journey through the realms of history, power and fame. The museum-style ropes and poles have gone so guests can truly get up close and personal with A-list celebrities, sports legends, political heavyweights and historical icons, reliving times, events and moments that made the world talk about them.

What to eat in New York ?

New York is one of the greatest food cities in the world. Not only can you get just about any kind of food in New York, but you can get some of the best. Besides all of the world-class restaurants and amazing hole-in-the-walls you wouldn’t find anywhere else in the country, you’ve got the iconic stuff, like black and white cookies, New York style cheesecake and the bagels. The pizza reigns supreme in New York.

What to buy in New York?

Shopping in New York offers a staggering array of shops and department stores including Bergdorf Goodman’s, Macey’s, Barney’s, Bloomingdales and Saks. If you’re looking for something more offbeat, head to the galleries and quirky stores of Soho. But if it’s designer shopping you’re after, visit New York’s ultimate shopping destination, Fifth Avenue. Here you’ll find upscale boutiques and high-street chains amongst some of New York’s most wonderful attractions.

Lastly, From Times Square and the Empire State Building to Central park and the Statue of Liberty, there are more legendary attractions in New York than any other place on earth. A major centre for media, culture, food, shopping and finance and trade, with a towering skyline and endless supply of restaurants and entertainment, it’s little wonder The Big Apple is considered by many to be the greatest city in the world.