Udaipur City : City of Lakes and Venice of East

Home Udaipur City : City of Lakes and Venice of East 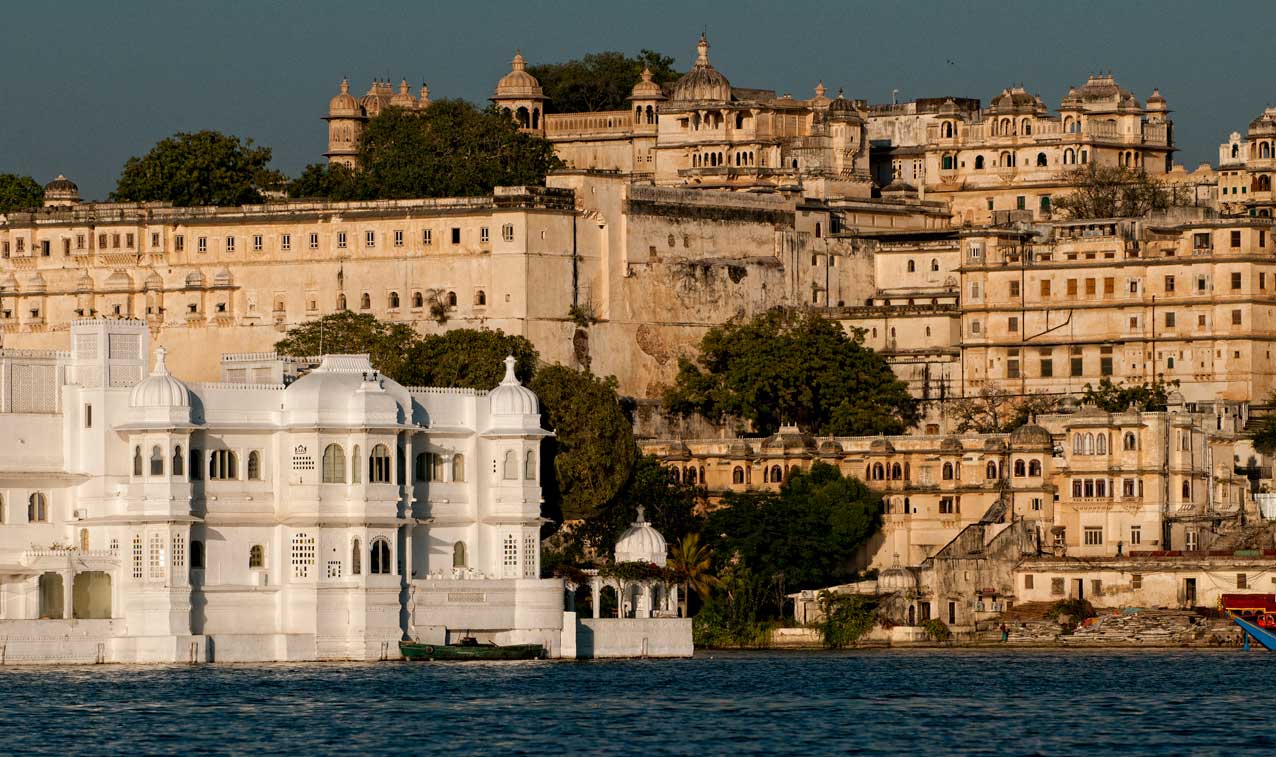 Udaipur, the capital of the former princely state of Mewar is a beautiful city in Rajasthan, India. It is also referred to as the “Venice of the East”, the “Most Romantic City of India” and the “Kashmir of Rajasthan”. The city of Dawn, Udaipur is a lovely land around the azure water lakes, hemmed in by the lush hills of the Aravalis.

A vision in white drenched in romance and beauty, Udaipur city of Rajasthan state is a fascinating blend of sights, sounds and experiences – an inspiration for the imagination of the poets, painters and writers. Their reflection in the placid waters of the Lake Pichhola is an enticing sight.

City Palace towers over the Pichola Lake. Maharana Udai Singh initiated the construction of the palace but successive Maharanas added several palaces and structures to the complex but retained remarkable uniformity in the design. The entry to the Palace is from the Hati Pol, the Elephant Gate. The Bari Pol or the Big Gate brings you to the Tripolia, the Triple gate. It was a custom to weigh the Maharaja under this gate in gold and silver, which was distributed to the populace. It is also now the main ticket office. Balconies, cupolas and towers of the palace give a wonderful view of the lake. Suraj Gokhada (or the balcony of the sun) is where the Maharana would grant public audiences mainly to boost the morale of the people in trying times. The Mor Chowk is the Hindi name of peacock square and is named after a vivid blue decorative glass peacock on the wall. 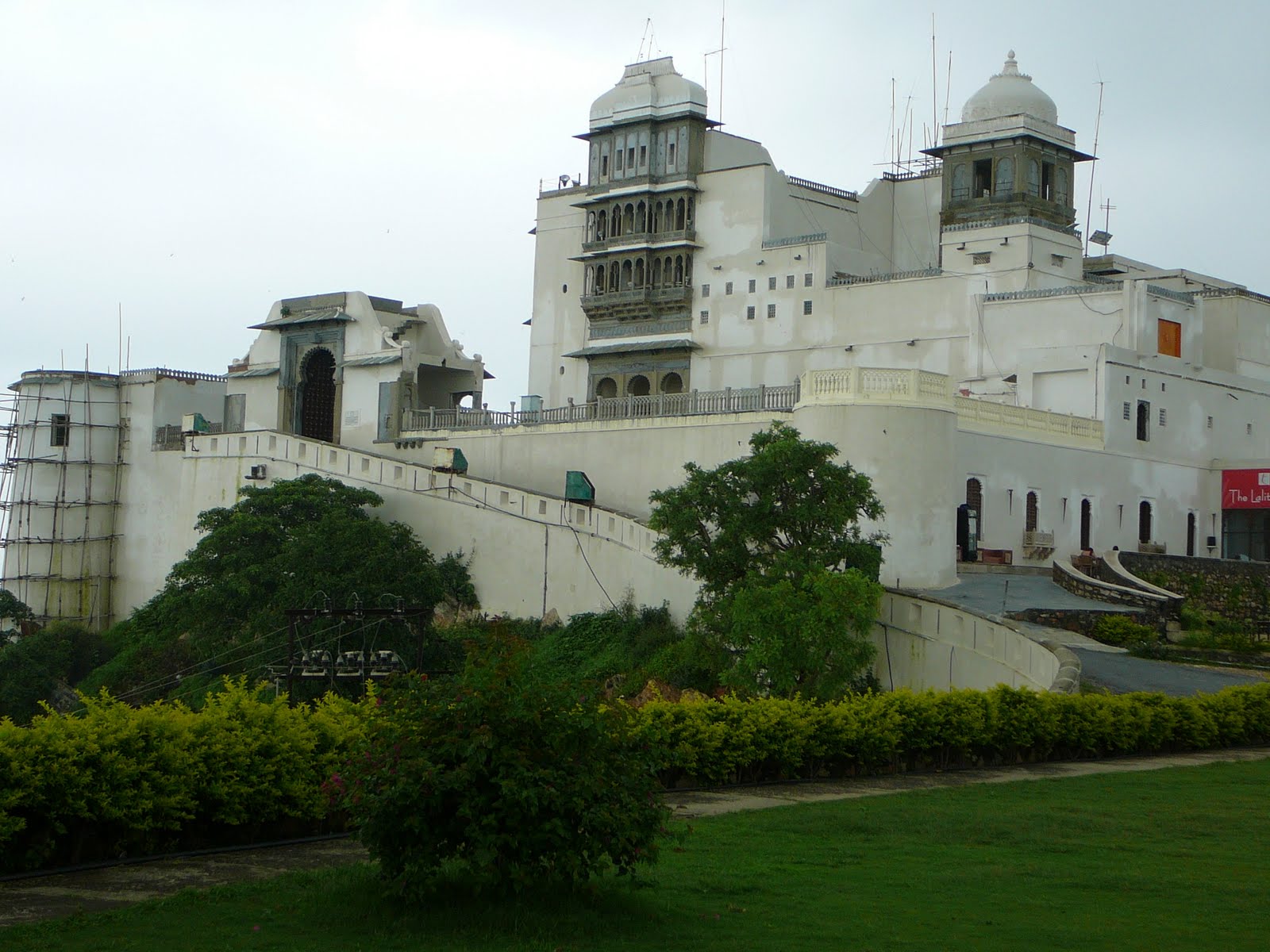 Outside Udaipur, this 18th century palace was built by Maharaja Sajjan Singh at a height of 2268 ft on the top of Bansdara Mountain. It was originally intended to be a five storey astronomical centre but the plan was shelved due to premature death of the Maharaja. It was later used as a monsoon palace and hunting lodge. The palace majestically dominates the sky line and offers breath taking view of the countryside.

The Lake Palace is located on Jag Niwas Island and covers the whole area (1.5 hectares) of the island in the middle of the Pichola Lake. Built by Maharana Jagat Singh in 1743, it was meant as a royal summer palace but now has been converted into a five star palace hotel. Its superb beauty and enduring charm and its reflection in the middle of the lake is like a leaf straight out of a fairy tale book. With intricate craftsmanship and ethnic themes using textiles and handicrafts all over, its beauty is beyond description. The surrounding lake murmurs pleasantly, with her rippling and lapping waves.

Literally meaning, “Craftsmen’s Village” Shilpgram comprises 26 huts set in 70 acres of natural surroundings at the foot of the Aravali Hills. It is a living ethnographic museum depicting the enormous diversity in crafts, art and culture of various Indian states. But the exquisite terracotta work mainly in dark red and dark brown sand material along with the wooden carvings are the forte of this ethnic village.  A colourful craft festival during winter infuses vitality and verve into this village.

The collection within the grounds of the Garden Hotel comprises a variety of vintage and classic vehicles like Cadillac, Chevrolet, Morris etc owned by the Maharanas of Udaipur. They used these automobiles as their luxurious modes of transport. However, other models are gradually being added to the collection in order to a unique aristocratic safari for the exclusive guests. This delightful lake, bordered by hills and woodlands was constructed by Maharana Jai Singh to the north of Lake Pichola in 1678 AD. This artificial lake was reconstructed by Maharana Fateh Singh (1884-1930 AD). A canal links the two via Swaroop Sagar and Rang Sagar Lakes. The beautiful Nehru Island as well as an islet bearing a solar observatory rise from the lake.

Maharana Sangram Singh built this in the mid-18th century. The ‘garden of the maidens’ brings to mind the lifestyle of the ladies of the court. The delightful gardens reflect their discreet and  impeccable taste. There are four pools with dainty kiosks. All around are flowerbeds, lawns, pools and fountains protected by a series of walls and shady trees. The fountains of the Sahelion ki bari function solely by water pressure and no pumps are used. The garden has a lotus pool and a sitting room decorated with paintings and glass mosaic. The whole ambience is flavoured by reminiscence of those beautiful belles enjoying themselves in lavish environs.

An impressive bronze statue of Maharana Pratap on his favourite horse Chetak, stands atop the Moti Magri (Pearl Mount) overlooking Fateh Sagar. Local people climb up the hill to pay homage to Rana Pratap and his faithful charger ‘Chetak’ who was fiercely protective about its master and stood by him till its last breath. This loyal steed sacrificed its life while carrying his master to safety from the battlefield of Haldighati. The sound and light show held here every evening is worth viewing.

Built by Maharana Jagat Singh I in 1651, the temple enshrines a black stone image of Lord Vishnu. There is a brass image of Garuda, the Lord of Birds, and mount of Vishnu. The exterior and the plinth are covered with base relief of alligators, elephants, horsemen and celestial musicians rising in tiers. Chanting, ringing of bells and music can be heard throughout the day. It is the largest and most splendid temple of Udaipur

Udaipur has numerous shops and many interesting local crafts that make it a one-of-its-kinds shopping experience. A plethora of items like folk toys, colourful tie-dye sarees and clothes, turbans, hand painted fabrics, silver Jewellery, wall hangings and miniature paintings in Rajput Style are the favourite buys. The beautiful images of gods and goddesses made in the nearby Molalla village near Nathdwara are not to be missed. The shopping spots include a cluster of stalls on the Lake Palace road next to the Rang Niwas Palace Hotel and the Jagdish Temple.

Rajasthani cooking was influenced by war-like lifestyle of its inhabitants and the availability of ingredients in this region. Food that could last for several days and could be eaten without heating was preferred, more out of necessity than choice. Scarcity of water, fresh green vegetables have all had their effect on the cooking.

Among the most traditional of Rajasthani dishes is dal-baati-chorma – a vegetarian favorite with three important components: the dal, or cooked spiced lentils, the baati are baked, unleavened whole-wheat dumplings, salted and brushed with ghee; and the chorma is dessert – whole wheat balls traditionally made from unsalted baati that are deep-fried, mashed, and then mixed with ghee and sugar.

The dish’s evolution in Mewar culture likely came about thanks to the long shelf life of the simple, nutritious baati—a hardy food for the hardy nomadic tribes of arid Rajasthan. Today it’s a beloved local staple and a constant presence at festivals and weddings.

The City in a shell

Udaipur’s kaleidoscope of fairy-tale palaces, lakes, temples, gardens and narrow lanes strewn with stalls, carry the flavor of heroic past, epitomizing valor and chivalry. It is a favourite marriage destination. Many celebrities, including film stars, business families, politicians chose Udaipur to hold marriage ceremonies and parties. Udaipur city is easily accessible from all the major cities of India including Delhi, Mumbai, Ahmedabad and Jaipur.