Ladakh is a part of the Indian state of Jammu and Kashmir. Ladakh consists of two districts – Leh and Kargil. Leh is at an altitude of around 3505 m while Kargil is roughly at an altitude of 2750 m. Due to the strong influence of Tibetan culture on it, Ladakh is often called ‘Little Tibet’.

Ladakh has sparse vegetation. Fauna is generally similar to that found in the Central Asia, exception being the migratory birds coming from the warmer parts of India during the summer.

Places to See in Ladakh

Ladakh is the largest of the ten provinces of Jammu and Kashmir is bordered by the Karakoram chain of mountains in the north and Himalayas in the south. Ladakh covers a total area of about 59,000 square kilometers and is made up of two administrative districts – Leh and Kargil. 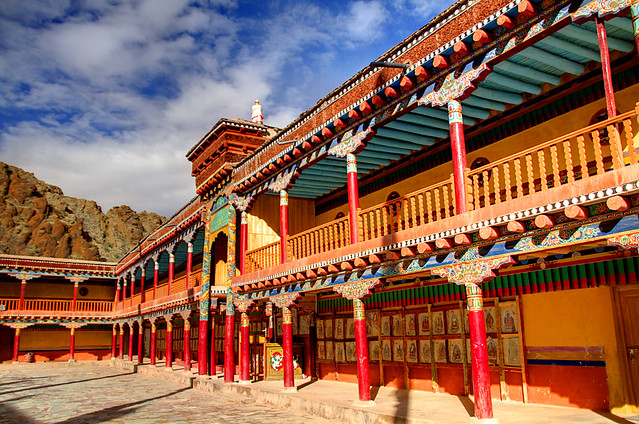 There are interesting tourist places in Ladakh. The Hemis monastery is the largest monastery in Ladakh. Hemis is famous for the huge painting of Buddha displayed once in 11 years to the public. 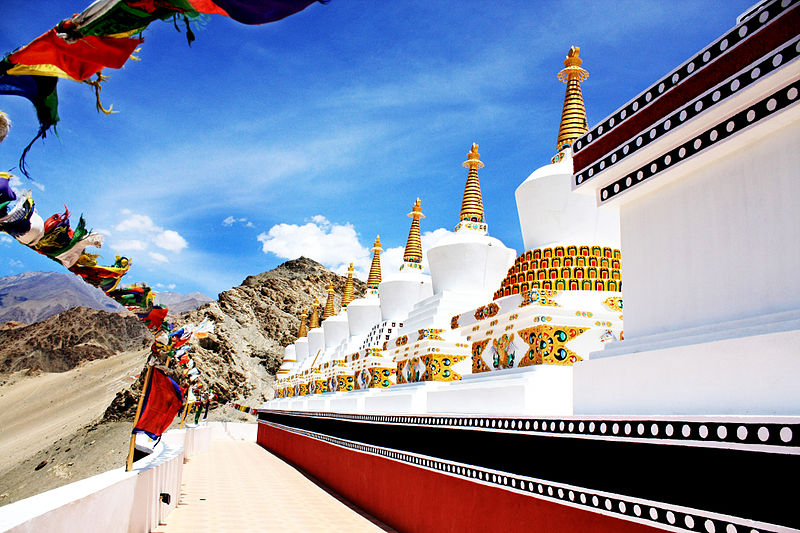 The Thiske monastery near Leh is known for its architecture while the Shey Monastery houses a huge gold plated copper statue of the Buddha.

Alchi, Likir and Lamayuru are amongst the oldest Gompas of Ladakh. Sankar Gompa, 3-km north of the town centre, is among the most accessible monasteries in central Ladakh.

For those keen on history can stop at Alchi is one of the significant historical sites in Asia on the Srinagar-Leh highway. So are Dah and Hanu on the far side of the great Indus river replete with legends and myths, which the locals can relate to you if are not tired, and if you can communicate with them. 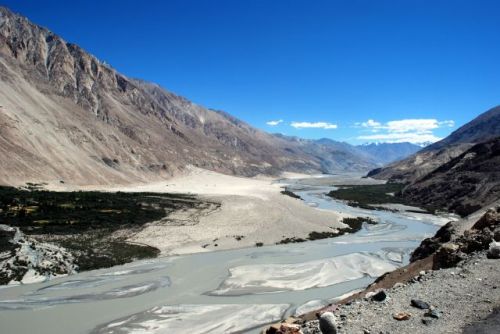 The beautiful Nubra valley with its breathtaking views transports you back into a nearly forgotten ‘Shangri La’. Once the trading route that connected eastern Tibet with Turkistan via the famous Karakoram Pass, it is one of the most recently opened area of Ladakh.

Ladakh is blessed with some beautiful lakes. The Tso Morari Lake is one of the largest lakes in Ladakh region and is almost like an inland sea, the Pangong Tso, at an altitude of almost 4,500 meters and 134-km long is an amazing sight. Kyaghr Lake is the halting place for trekkers moving from the Kiangdum camping ground to the Tsomorari Lake.

Ladakh, the paradise-like city that crowns the country and lends it an exotic charm, has always been the first choice for a holiday in the hills. Renowned throughout the world for its enthralling sites, the place lets you enjoy several adrenaline-pumping activities like wildlife safari, trekking and mountain climbing.

Undoubtedly, the tourists will find uncountable options in the city for accommodation, but before you make a choice, take in account the location, facilities as well as the cost of the hotel. The heavenly setting of the hotel adds to the delights of your vacation, so book a hotel that offers mesmerising scenes for the eyes. Also, one can opt for a heritage hotel built in popular Ladakh architecture flaunting the rich Tibeto-Buddhist culture.

Beside hotels and lodges, the travellers can attempt to spend days in the environmentally-friendly luxury tented resorts. The well-equipped weather proof tents and camps blend harmoniously with nature to provide a perfect experience to its visitors.

If you wish to take some memorabilia from the world’s highest hill station, then shopping in Ladakh will be the ideal option. You can find traditional curios and all kinds of trinkets in the colorful markets of Ladakh.

The popular items of shopping in Ladakh are Pashmina shawls, stoles and woolen garments. Hand-made woolen socks, gloves, caps and sweaters, which are locally made, are also favorites with tourists. You can also check out the hand-woven rugs, carpets and shawls which are available in a range of prices. With floral or geometric designs or dragon motifs on them, they can also be hung as decorative wall hangings.

If you are interested in Tibetan handicraft items, then you can find fascinating ones like the prayer wheels, Buddhist masks and thangka paintings. Also popular are the Tibetan silver jewellery and traditional turquoise jewellery from Ladakh. If you wish to take some delicious edibles as souvenirs from Ladakh, then apricots are the best.

How to Reach Ladakh

Ladakh, “The Land of High Passes” is known universally for its unique culture and tradition which has been preserved beautifully. The mystic aura of this snow-covered desert attracts tourists from all corners of the world.

Connectivity has been provided on the arduous routes of Ladakh through air as well as road. The Ladakh region is open for tourist from May to October; reaching Ladakh becomes difficult during winters in Ladakh.

The nearest airport in Ladakh region is in Leh. Flights to Leh are available from Delhi, Chandigarh, Srinagar and several other cities.

The closest railway station is Jammu Tawi, which is about 700 km away from Ladakh. From Jammu Tawi to Ladakh taxis are available and are rather costly, it takes nearly 2 days to complete the journey.

There are only two routes to reach Ladakh. One is from Srinagar and the other from Manali. The route from Srinagar to Ladakh via Kargil remains open from early June to November.

However, due to Insurgency in Jammu and Kashmir the main route now is the Manali-Leh Highway from Himachal Pradesh. The Rohtang Pass on the Manali-Leh highway opens between July and September.

The HRTC and J&K SRTC operate daily bus services both deluxe and ordinary from Manali and Srinagar. Various transport facilities like mini coaches, shared taxis and rented motorbikes are also available to reach by road and the rates are pretty reasonable.

If you ever dreamt of a vacation in an exotic land shrouded in mystery, then you should travel to Ladakh, which offers you everything from adventure sports to spirituality. Ladakh lies at altitudes ranging between about 9,000 feet and 25,170 feet. Ladakh is a land of freezing winds and burning hot sunlight, it is said that only in Ladakh can a man sitting in the sun with his feet in the shade suffer from sunstroke and frostbite at the same time! Popularly known as the Lama Land or little Tibet, Ladakh has it all from trekking and mountaineering to Buddhist tours of various monasteries.