Time given to us defines how long we will stay with our families, how many good things we will manage to do, and how much interesting things we will see and learn. Perhaps, that is the reason for the existence of the immense amount of wrist watches, which seem to be the best proof of the highest value of time for the humans. They are available in all the possible shapes, styles, price categories, and also technical characteristics. It is true that the watch a man wears reflects his status and achievements in life; it is also a fact that for a woman her wrist watch is rather an additional piece of jewelry. Here is the list of the top 7 most expensive watches in the world.

The Hublot Classic Fusion Haute Joaillerie “$1 Million,” limited to only eight pieces, earns its $1 million price tag with the 1,185 baguette diamonds covering every surface of the watch, from the case and bracelet to the openworked dial. For the case alone, a 15-person team had to perform 1,800 hours of cutting and 200 hours of dimensional checking and quality control. It is an outstanding diamond watch that has 18 carat white gold dial of 4.4mm with 18 carat white gold lining and the bracelet also contains 18 carat white gold.  It took over 1 full year just to find the diamonds and bring them to the headquarters from all corners of the earth but the end result was fully worth it! Every single stone was cut by a well renowned jeweler from New York, with over 40 years of experience, in order to make sure each bears the same cut signature. Certainly one of the most expensive watches ever made by Hublot. 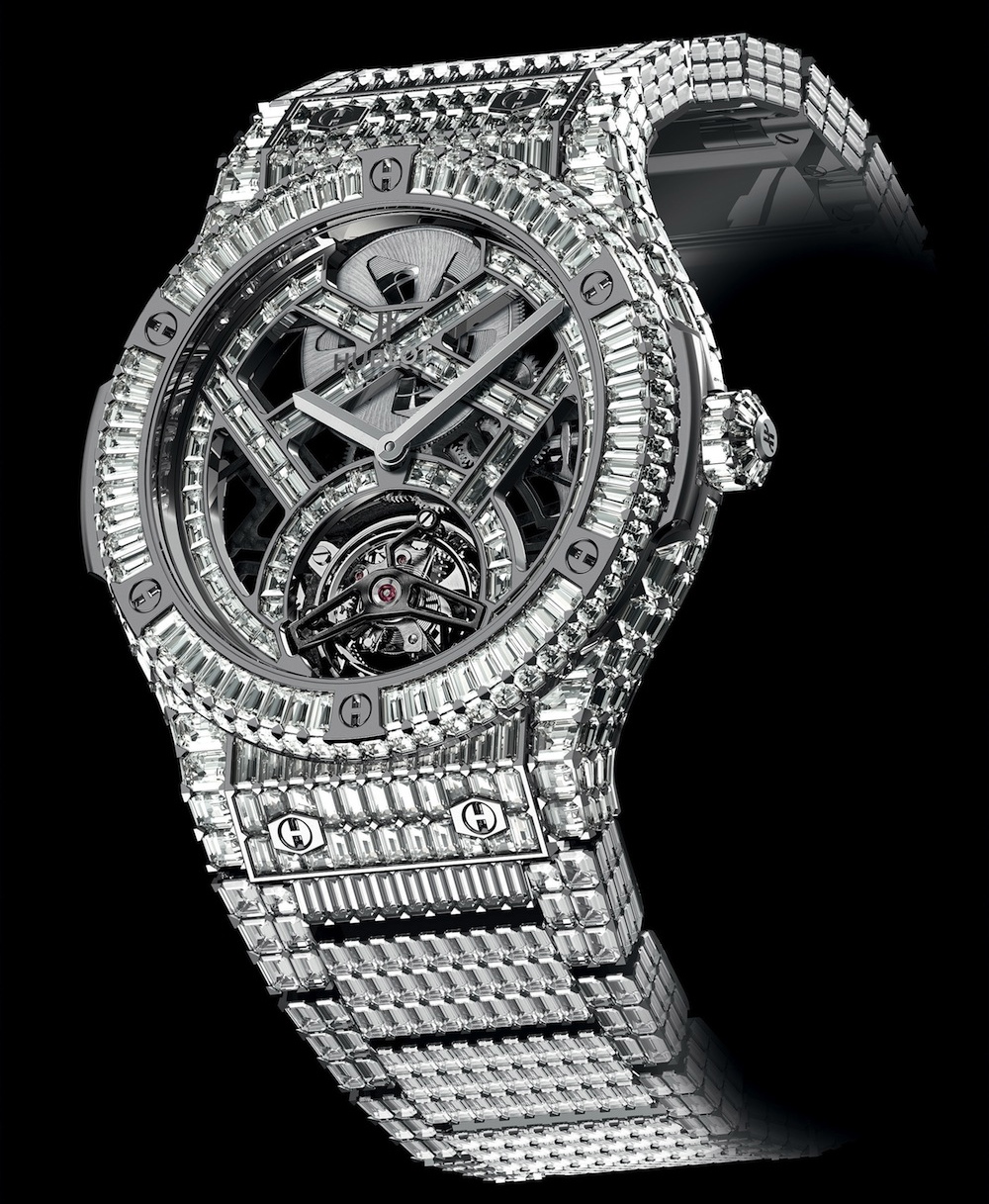 Designed by Roger Dubius himself, there have been only 88 Millesime Double Flying Tourbillon watches created and each one is a work of art. The mechanism inside is integrated with, as the name suggests, a double flying tourbillion, which compensates for the gravity’s effect on the watch. What you get is not just a luxury branded chronograph, but one of the most accurate timepieces ever created. The Roger Dubuis Excalibur Quatuor finds also earns a top spot among the most expensive watches list thanks to its case, which is made entirely of silicon (according to the brand, the first such watch of its kind), a material with half the weight of titanium and four times the hardness. The Quatour  is equipped with the RD101 movement, notable for its four sprung balances, which work in pairs to compensate for the effects of gravity much faster than a tourbillon would, resulting in a more accurate watch. The Excalibur Quatuor is priced at 1 million Swiss francs (which translates to roughly around $1,125,000 U.S.) The Jaeger Lecoultre Hybris Mechanica à Grande Sonnerie has a retail price of $ 1,474,070. The watch boasts 1,300 parts, which make it capable of playing the entire Big Ben chiming sequence. It was released in 2009 as part of the Hybris Mechanica 55 trilogy, a trio of very expensive watches that comprised 55 complications altogether. Produced as a limited edition of only seven pieces, the Vacheron Constantin Tour de I’Ile, which celebrated the brand’s 250th anniversary, is priced at $1,538,160. This expensive watch has two faces (on the front and back) to make room for its many displays, including a second time zone, perpetual calendar, and sunset time indicator, among others. The Tour de l’Ile may be the most complicated timepiece on the list of watches over $1 million. What’s inside the world’s most expensive luxury watch? One tourbillion is already a class of its own. But what about four asynchronous tourbillions? That’s what the Greubel Forsey Invention Piece 2 Quadruple Tourbillon has to offer. This feature further enhances the timepiece’s accuracy. On top of the quadruple tourbillions, this watch exhibits a classic, elegant look that makes it worthy its price tag. The Greubel Forsey Art Piece 1 was revealed at the 2013 SIHH, and quickly rose to the upper echelon of the “most expensive watches ever made” rankings, with a price of CHF 1.5 million (approximately $1.6 million). The watch’s standout feature is the nanosculpture by artist Willard Wigan in the crown. The Richard mille RM 56-01, which features a distinctive, all-sapphire glass case, is priced at $1.85 million. The RM 56-01 was on display at SIHH 2013. The price is a rarity even for Richard Mille, on average one of the most expensive watch brands out there, with six-figure prices commonly found. Richard Mille upped the ante at SIHH 2014, with the launch of the Richard Mille Tourbillon RM 56-02 Sapphire, which combines the tripartite sapphire case of the RM 56-01 with the brand’s revolutionary “cabled movement” design. Richard Mille’s most expensive watch yet, which breaks not only the $1 million barrier but the $2 million one as well, priced at a cool $2,020,000. Finally, the most expensive watch we’ve come across in recent years is from the German luxury watch brand A.Lange & Sohne. The A. Lange & Söhne Grand Complication, unveiled at SIHH 2013, is priced at a staggering 1.92 million euros (approximately $2,497,000 in U.S. currency). The Grand Complication features a grand sonnerie and petit sonnerie in addition to a minute repeater, a monopusher chronograph with a split-seconds function and jumping seconds, and a perpetual calendar with a moon-phase display.