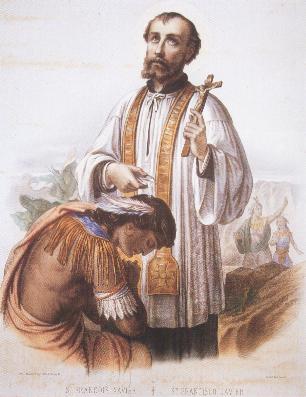 There are so many saints that we all have heard of. A saint doesn’t become a saint simple. They become saints because they have love for god. There is one such saint called St. Francis Xavier. He was a Roman Catholic missionary. He loved Jesus and always preached about Jesus. He wanted to spread the word of god and wanted the Portuguese to know about Christianity. Thus he came to India in go those days all the Portuguese had settled in India. Thus many Portuguese Catholics are still in Goa and they became Catholics because of St. Francis Xavier. In his initial years he came to Goa and there were Portuguese rule but no love for god. Thus he brought about Christianity there and made known to people of Goa.
When Francis Xavier died he was not a saint he died as a martyr. His body was buried in Rome and his body didn’t rot. His body remained incorrupt and that is when they realised he is a powerful person and someone dear to god.
The body of St. Francis Xavier is now in the Basilica of Bom Jesus in Goa, where it is placed in a glass container encased in a silver casket on 2 December 1637.
The right forearm, of St. Francis Xavier which he used to bless and baptize his converts, was detached by Superior General Claudio Acquaviva in 1614. It has been displayed since in a silver reliquary at the main Jesuit church in Rome. Another of Xavier’s arm bones was brought to Macau where it was kept in a silver reliquary. The relic was destined for Japan but religious persecution there persuaded the church to keep it in Macau’s Cathedral of St. Paul. It was then moved to St. Joseph’s and in 1978 to the Chapel of St. Francis Xavier on Coloane Island. More recently the relic was moved to St. Joseph’s Seminary and the Sacred Art Museum.

Saint Francis Xavier’s relics are kept in a silver casket, elevated inside the Bom Jesus Basilica and are exposed (being brought to ground level) which is generally every ten years, but this is discretionary. The last exposition was held in 2004 from 21 November 2004, till 2 January 2005. It was the 16th exposition to be held in succession. The 17th Solemn Exposition of the sacred relics will be held this year in 2014, beginning from 22 November and concluding on January 4th, 2015. There will be no more expositions done further.
People of other faiths and people from all over the world come to Goa just to see the body of St. Francis Xavier it is so surprising how the bones are not being diminished from 3th December 1553 till today. We are in 2014 now it is only the grace of god and the love that this St. had for god that god made his deeds known and even after death he is recognized.
It is said that it is a blessing to having being visited St. Francis Xavier’s body. Indeed many believe and still believe that he is still alive. A story or a rumor I heard as a child about St. Francis Xavier is that when St. Francis Xavier died there was a lady who came to his funeral and while people kissed his foot she bit his toe and blow started streaming down that how people were surprised. Well the forearm of St. Francis Xavier is considered holy and sacred as he was a man of religion and had a fear of god.
Another tale I heard from one of the church aunties were that St. Francis Xavier used to preach and say the mass and share the Eucharist on the ship while travelling to Rome and other places and even the crabs used to come right on top of the ship from the waters and heard him there. They too were living beings and as a sign of respect they used to listen to him while he prayed.
Many people were being healed as he prayed to Jesus. Thus many of the people in Goa the Portuguese and the localities believe in him. He is a powerful saint. As also in the basilica of Bom Jesus they have these several small statues of St. Francis Xavier’s tombs shaped show piece. They bless it and kiss it as a sign of sacred thing that one could keep in their homes and also gift it.
People should of other faith too should go to Goa not to enjoy the booze and fun in Goa but to see the body of St. Francis Xavier. This year will be the last expositions indeed we are lucky that we can go we still have the opportunity to go. Others and the future generations will be certainly unlucky to not have got the opportunity to see the blessed and the sacred body of St. Francis Xavier.
There are a lot of things you will know about St. Francis Xavier only once you visit his holy grail. It is very sacred and all Christian (catholic) families pay a visit and take his blessings. He is the most powerful saint of all. We all will know the power he has only when we go there. The priests and saints will be able to tell us about him better as we go and try to enquire more about him. Blessed are the people who get the opportunity to see and experience the power of his blessings. Many people go for retreats and holy places like Israel and Egypt to see the Calvary cross of Jesus, well for those who can’t go so far especially the Indians can at least go to see Francis Xavier’s the powerful saint and take his blessings. For a couple getting married and people who are planning to have a family can take his blessings.
This year being the last year of exposition and the 17th year of exposition, we all must take the opportunity to go and see the blessed body of St. Francis Xavier.