The City of Gates : Aurangabad

Home The City of Gates : Aurangabad

Discovered in 1610 by Malik Ambar, originally named Kharki, Aurangabad is surrounded by several historical places, most of which are much older than the city itself. It is one of the rare districts hosting two important UNESCO World Heritage Sites. Capital of Marathwada region, Aurangabad provides a perfect base to stay and explore the tourist as well as religious attractions around.

Nearing its 400 years of history, Aurangabad has seen some interesting historical incidents. Owing to Malik Ambar’s love for architecture, the city was a beautiful place during its early days. It grew rapidly to become an important place of trade, which later witnessed a violent act of war by Mughal emperor Jahangir, who burnt it down. But the city grew again. After Malik Ambar’s demise in 1626, his son took the charge and named the city after himself as Fatehnagar. But that did not last long as Aurangzeb, then Prince of the Mughals appointed as Viceroy, took charge of the city and named it Aurangabad. A fortified wall was erected around the city later.

Aurangabad district is gifted with a wide variety of tourist places to please the travelers with different tastes. It is also surrounded by several important religious places.

Ajanta Caves, a historical treasure hosting an illustrious collection of ancient paintings, are situated in a horse-shoe shaped valley near village Ajintha. This evergreen place of scenic beauty is adorned by river Waghur that flows from the feet of the ravine emerging out of a pool filled in by a seven-leap waterfall. These Buddhist caves built under the patronage of Hindu kings are a fine example of the harmony that existed between the two religions. A UNESCO World Heritage site, the caves, dating as back as 2nd century BC, have been attracting tourists from all over the world for the last two centuries.

Ajanta Caves comprise of Chaitya-grihas, the halls with a stupa, the monument consisting Buddhist relics, used by the Buddhist monks for worshiping and Viharas, the monasteries. Most of these caves have mesmerizing paintings on the walls and attractive floral, vegetative, geometric patterns, auspicious symbols, celestial and heavenly beings on the ceilings.

Carved in the volcanic basaltic rock, the grand Ellora Caves are the true heritage of Indian art and culture. Spread over a range of 2 kilometers, the 34 caves represent three religions, Buddhism, Hinduism and Jainism, a testimony to the religious harmony that existed in the ancient India. These excavations in the part of Sahyadri hill range formed nearly 65 million years ago during the Cretaceous period have some amazing structures, the prominent highlight being the Kailasa Temple, the world’s largest monolithic structure hewn downwards into the hill.

The first 12 of these excavations are the Buddhist Caves, created between the fifth and the seventh century. The Buddhist caves mostly served as monasteries with multi-storied living quarters and prayer halls with statues of Buddha and Bodhisattvas. The most impressive of these is the 10th cave named Vishvakarma or the Carpenter’s Cave. The ceiling of this has a ribcage-like pattern depicting the wooden beams. The imposing structures of the caves Do-tal (two-storied) and Tin-tal (three storied) are also impressive.

The further seventeen are the Hindu Caves. These caves illustrate a different style of sculpting and artistry. The complexity of designs and themes in some of these caves demanded planning and contribution of several generations of the artists.

The most famous of the Hindu caves is the majestic Kailasa Cave, or Kailasanatha, the temple of god Shiva, a depiction of his abode at the Kailasa Mountain in the Himalayas. Several stories high, the whole structure has been hewn out of a single rock, with the imaginative theme of elephant sculptures at its base that appear to be bearing the structure on their back. There is a mandapa, an antechamber hosting the sculpture of Nandi, the sacred bull, in front of the central temple which is at the heart of the structure, connected by a rock bridge. One can see different motifs and sculptures from the epic Indian mythologies everywhere in this cave, with the striking sculpture of the demon lord Ravana trying to lift the Kailasa Mountain being a landmark in the Indian art. The construction of this great structure demanded a massive effort of removing 2,00,000 tones of rock and a period of over 100 years.

Amongst the other notable Hindu caves are Dashavatara, depicting ten re-incarnations of God Vishnu. The depiction of Vishnu’s re-incarnation as a neither-man-nor-lion, where he emerges from a pillar and slays Hiranyakashipu is particularly graceful. The other notable caves Rameshvara, Dhumar Lena, Ravana ki Khai and Nilkantha have several interesting sculptures.

The last in the row are the Jain caves, the ones assumed to have been built last. These caves present amazingly detailed artwork. Chota Kailasa, a miniature Kailasa Temple, Indrasabha and Jagannath Sabha are considered to be the best amongst the Jain caves. Unlike most of the others, the Jain caves had rich and vivid paintings at the ceilings which can still be seen in pieces and admired. 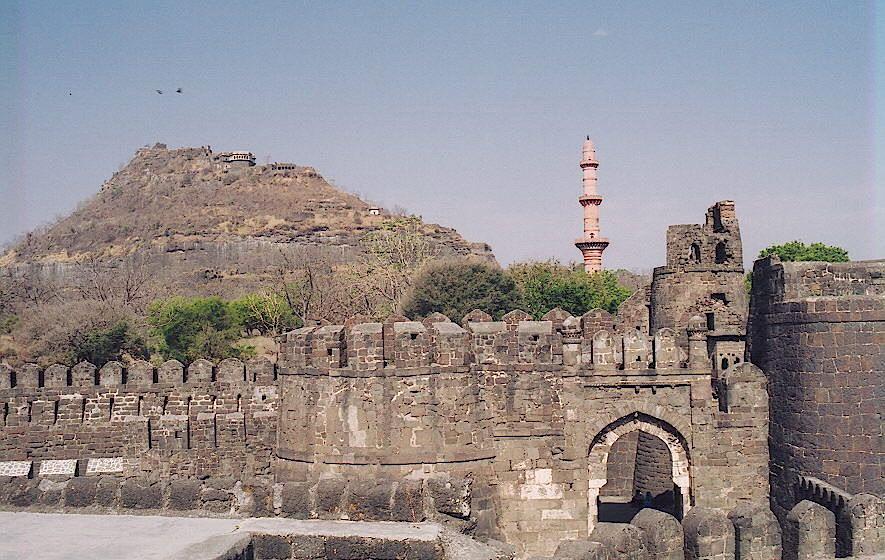 Rising on the Deccan plateau northwest of Aurangabad is the momentous landmark of Devgiri Fort, situated in Daulatabad Village. One of it’s kind, this massive, pyramidal fort is an awe-inspiring example of defense architecture, grand from outside, astonishing from inside. One of the best-preserved medieval forts in the world, Devgiri tells numerous tales of splendor, betrayal, blood-shed and that of a long line of powerful rulers and prominent historical figures.

The fort has several interesting monuments within. Prominent ones of these are, Chand Minar, a 30 meter high watch tower, a large stone-made elephant pool, which would also be the major source of water during the siege, and several cannons, the most notable of these being the Medha Toph (the ram cannon), composed of five metals, capable of firing a shot twelve kilometers long. At the top is a lovely royal palace named Baradari (of twelve doors), with an entertainment hall and balconies offering the picturesque views around.

About a decade after the great wonder of India, Taj Mahal was built by Shah Jahan in the loving memory of his wife, Mumtaz Mahal, Prince Azam Shah, his grandson, built Bibi-ka-Maqbara in the loving memory of his mother Rabia Durrani. An intended replica of Taj Mahal, Bibi-ka-Maqbara does not quite live up to the standard of the great monument at Agra. However, if observed as an original creation in its own, it is quite beautiful and worth a visit.

The tomb of Rabia Durrani lies at the ground level in the centre of the mausoleum. Enclosed in an octagonal structure of marble screens having delicate patterns carved upon them. The serenity and the quietness inside the mausoleum makes us aware of the truth of mortality and yet engulfs us with a strange sense of immortality. 27 kms. from Aurangabad, you can find the tomb of Bani Begam – companion to one of Aurganzeb’s sons. It lies amidst extensive landscaped gardens, scatter with fluted pillars, elegant domes and artistic fountains – showcasing the impressive architecture of the times.

35 kilometers from Aurangabad City and half kilometer from Ellora Caves, lies this 18th century temple with its beautiful architecture and carving, one of the five ‘Jyotirlingas’ in Maharashtra were Shiva is worshipped. 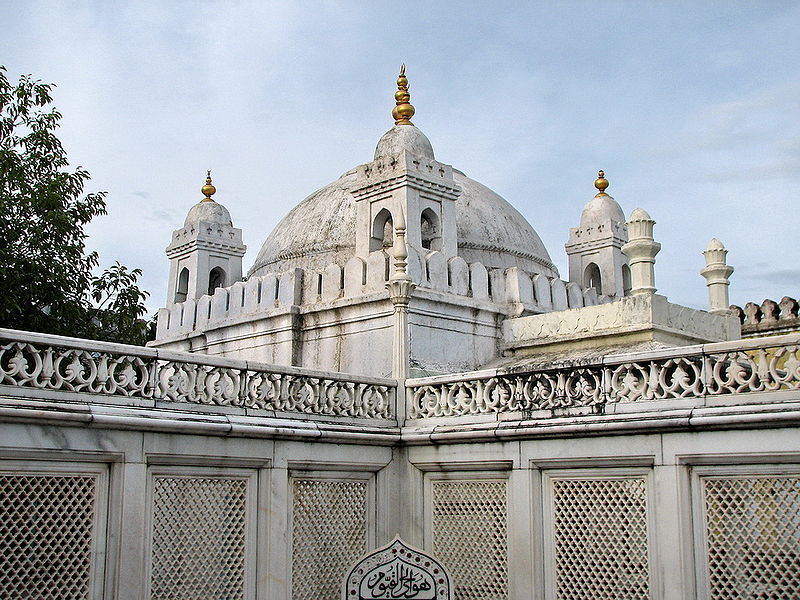 26 kms. from Aurangabad city lies Khuldabad, sorrounded by beautiful natural and eye catching mountains, literally ‘heavenly abode’. It is the holy shrine of Muslims. The final resting place of last great Moghul Emperor Aurangzeb, He built the crenellated wall around the town, once an important center for the Mughal Emperor Aurangzeb and few great Sufis.

A region as rich in the art and culture of several communities, would naturally have a legacy of superb handicrafts. The legendary beauty of Paithani silk saris, the intricate silver inlay craft of Bidri ware which reached its culmination under the Mughals, and the beautifully woven silk Himru and Mushru shawls continue to cast their spell on visitors.

Aurangabad is known for some of the finest colleges and university in Maharashtra. It is the fastest growing industrial town in India; but the charm and glory of its long past has not been lost. Its heritage is rich and varied – the result of the artistic and cultural influences of several dynasties since its first Stone Age inhabitants.