Uttarakhand, well-known as the “Land of the Gods” or “Dev Bhoomi”, has the most sacred Hindu temples or the Char Dhams – Badrinath, Kedarnath, Gangotri and Yamunotri, in the state. The state is the point of origin of the most sacred and famous rivers of the country, Ganga and Yamuna. Uttarakhand also houses the “Valley of Flowers”, which is also a UNESCO World Heritage Site.

The state has a total area of 53,483 sq km and is mainly divided into two parts; Garhwal and Kumaon.  Uttarakhand is home to all the famous hill stations of northern India. The dense jungles of Uttarakhand make it a perfect home for 12 National Parks and Wildlife Sanctuaries.

Besides the picturesque views of the hills, religious destinations, the state also offers various adventure sports such as trekking, climbing, and water rafting.

The zone has lot of travel destination some of these are as follows.

Corbett National Park makes an interesting side trip from Nainital. Named after hunter turned conservationist Jim Corbett, it has dense forest and an exotic array of wildlife. One of the best ways of exploring the park is on the jeep or elephant safaris that take place daily in the early morning and afternoon. The park has a tiger reserve, but tiger sightings are less common than at some of India’s other national parks. The Dhikala zone of the park is the most panoramic, with stunning valley views, and offers the best change of animal sightings. You may even get to see wild elephants.

Ancient Haridwar (the “Gateway to God”) is one of the seven holiest places in India, and one of the oldest living cities. Located at the foothills of the Himalayas in Uttarakhand, it’s particularly popular with Hindu pilgrims who come to take a dip in the holy waters of the fast flowing Ganges River and wash away their sins. The evening Ganga Aarti holds special appeal.

Rishikesh, located not far from Haridwar, is as popular with western spiritual seekers as what Haridwar is with Indian spiritual seekers. Known as the birthplace of yoga, people flock there to meditate, do yoga, and learn about other aspects of Hinduism in the various ashrams and yoga institutes. Despite the growing number of visitors, the town’s lanes and alleys retain a old-world charm, and it remains a wonderful place to relax and unwind amongst nature.

The hill settlement of Nainital, in the Kumaon region, was a popular summer retreat for the British during the time they ruled India. It features the serene, emerald colored Naini Lake and action filled strip called The Mall, lined with restaurants, shops, hotels, and markets. Enjoy one of the many forest walks, explore the surrounding area on horse back, or relax on a boat in the lake.

Mussoorie, the queen of the hills, is one of the most popular and fascinating hill resort of northern India. Its green hills and varied fauna and flora make it a colourful and picturesque hill station, commanding a wonderful view of extensive Himalayan snow ranges to the North-East, and Panoramic view of the Doon valley to the south. At a distance of 52 km. from Nainital, Mukteshwar set atop a high ridge, is a beautiful Himalayan resort. Surrounded by fruit orchards and thick coniferous forest, it provides a majestic view of the Himalayas and the Almora town below in glittering moonlit nights. The famous Indian Veterinary Research Institute is also located here.

Bhimtal is located in the Kumaon region of Uttarakhand , in the northern region of India. It is located at an altitude of 1,371 m above sea level amongst the Kumaon hills. It is 23 km from Nainital. The main tourist attraction of this small hill station is its lake. It is one of the largest lakes in the district of Nainital. The lake offers scope for boating to the travelers. In the middle of the lake, there is a beautiful island with a restaurant. The island provides a panoramic view of the lake as well as its luxuriant surroundings.

The captivating landscape of The Valley of Flowers National Park in the Gharwal region comes alive with the monsoon rain. This high-altitude Himalayan valley has around 300 different varieties of alpine flowers, which appear as a bright carpet of color against a mountainous snow capped background. It’s a favorite trekking destination. 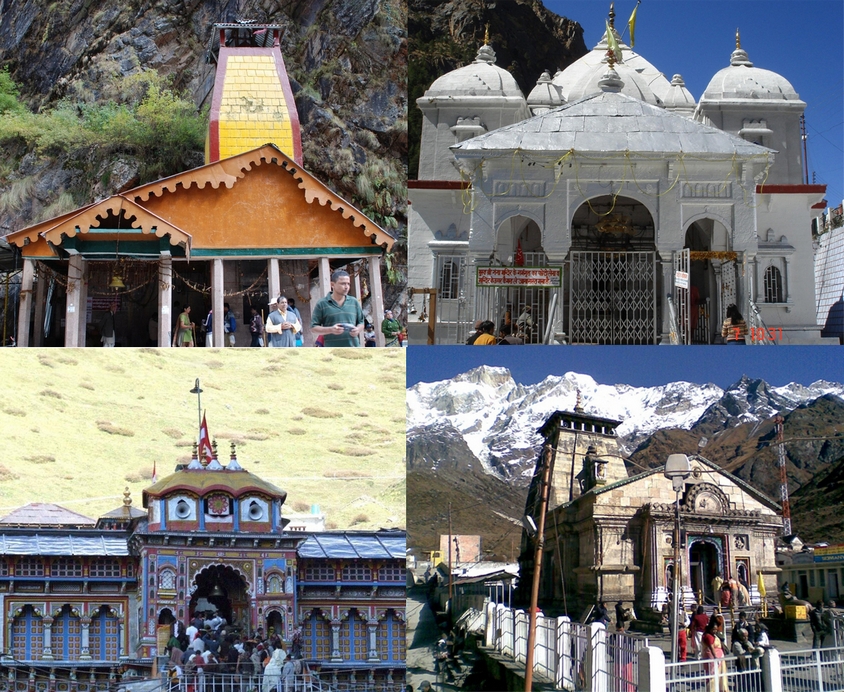 Located high up in the Garhwal region of Uttarakhand, the Char Dham (four temples) mark the spiritual source of four holy rivers: the Yamuna (at Yamunotri), the Ganges (at Gangotri), the Mandakini (at Kedarnath), and the Alaknanda (at Badrinath). Hindus consider visiting the Char Dham to be very auspicious. Not only is it believed to wash away all sins, it will also ensure release from the cycle of birth and death.

Although, shopping options may not be in plenty in Uttarakhand, but you may pick up the following as souvenirs.

Mostly shopping is done around the mall areas of hill stations. Government emporiums as well as private shops also serve as good places to shop from. The Paltan Bazar and the Tibetan market are a few places one can shop from.

Uttarakhand is situated at the edge of the Himalayas, and shares its boundary with China (Tibet) and Nepal. The state has Himachal Pradesh in the north-west and it has Uttar Pradesh towards its South. Uttarakhand, earlier known as Uttaranchal, is a hilly state situated in the North of India. Dehradun, the capital of Uttarakhand, is also known for its beautiful surroundings, as it lies in the Doon Valley. The state is also famous for its rich natural resources, dense forests, glaciers and snow-clad peaks.