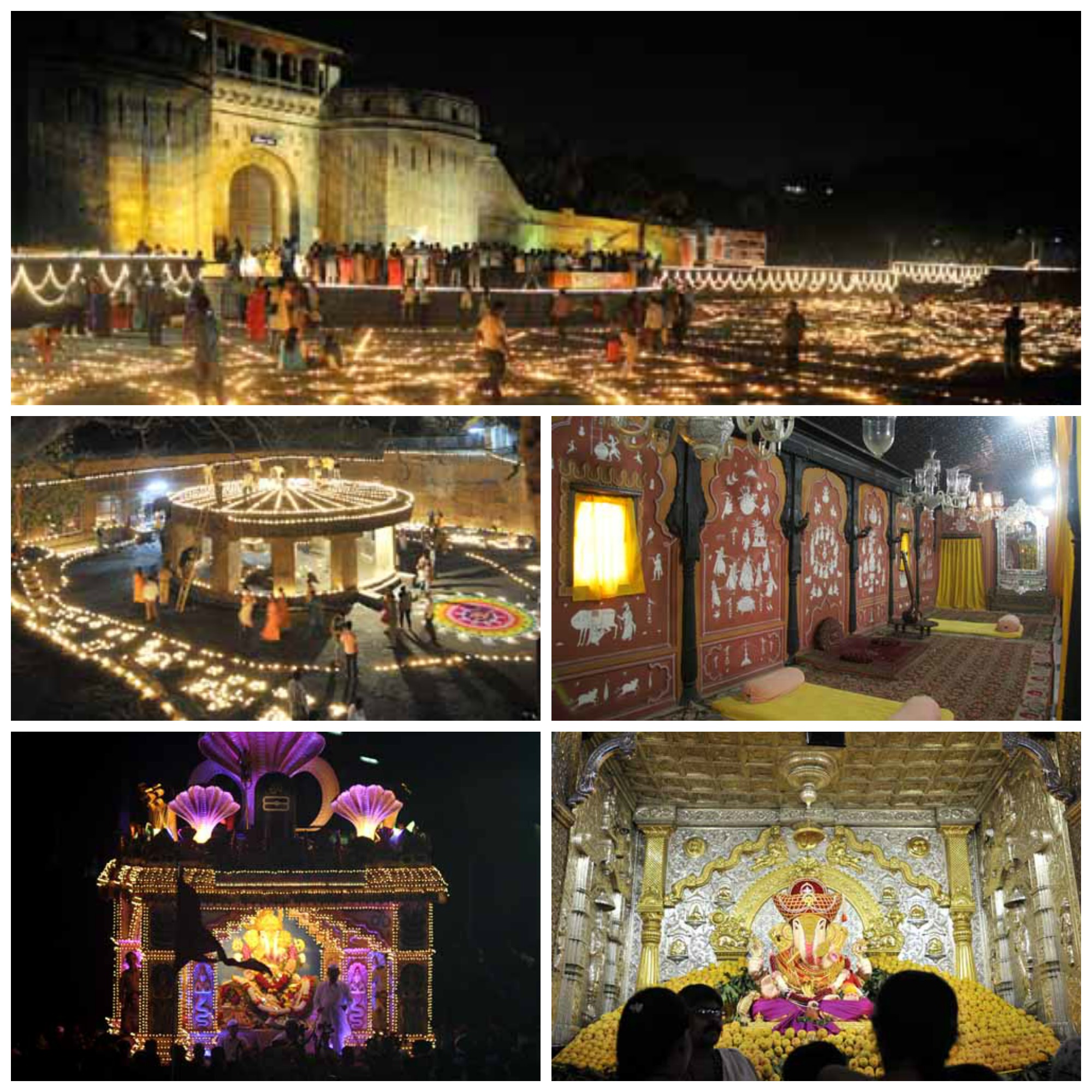 Queen of the Deccan, Oxford of the East, and cultural capital of Maharashtra, Pune is a city with a future that promises to be as interesting as its history. Long-standing bastion of the Maratha empire and home to the legendary Raja Shivaji, the Pune district is marked by magnificent land and forts, testimony to its glorious past.

After Shivaji, the early 18th century saw the emergence of the Peshwas, a Maratha family that grew from being ministers at the court into a major political power over the next few decades. However, after the battle of Panipat in 1761, the Maratha empire began to decline and in 1818, Pune was taken over by the British East India Company.

Today, Pune is the centre of traditional Marathi culture, in which education, arts and crafts, and theatre are given pride of place. It has one of India’s oldest universities and its numerous colleges attract both Indian and international students, which is probably why it is called the Oxford of the East.

Pune is slowly becoming a cosmopolitan city and is now an important commercial centre. The narrow winding roads of the old Pune offer an interesting contrast to the open, spacious new city. However, Pune retains the old-world charm and its many quaint characteristics, including the omnipresent cyclists, rickshaws and a daily siesta hour that is taken very seriously indeed.

Surrounded by verdant hills and beautiful lakes, Pune has a temperate climate and is among the greenest urban areas in the country. 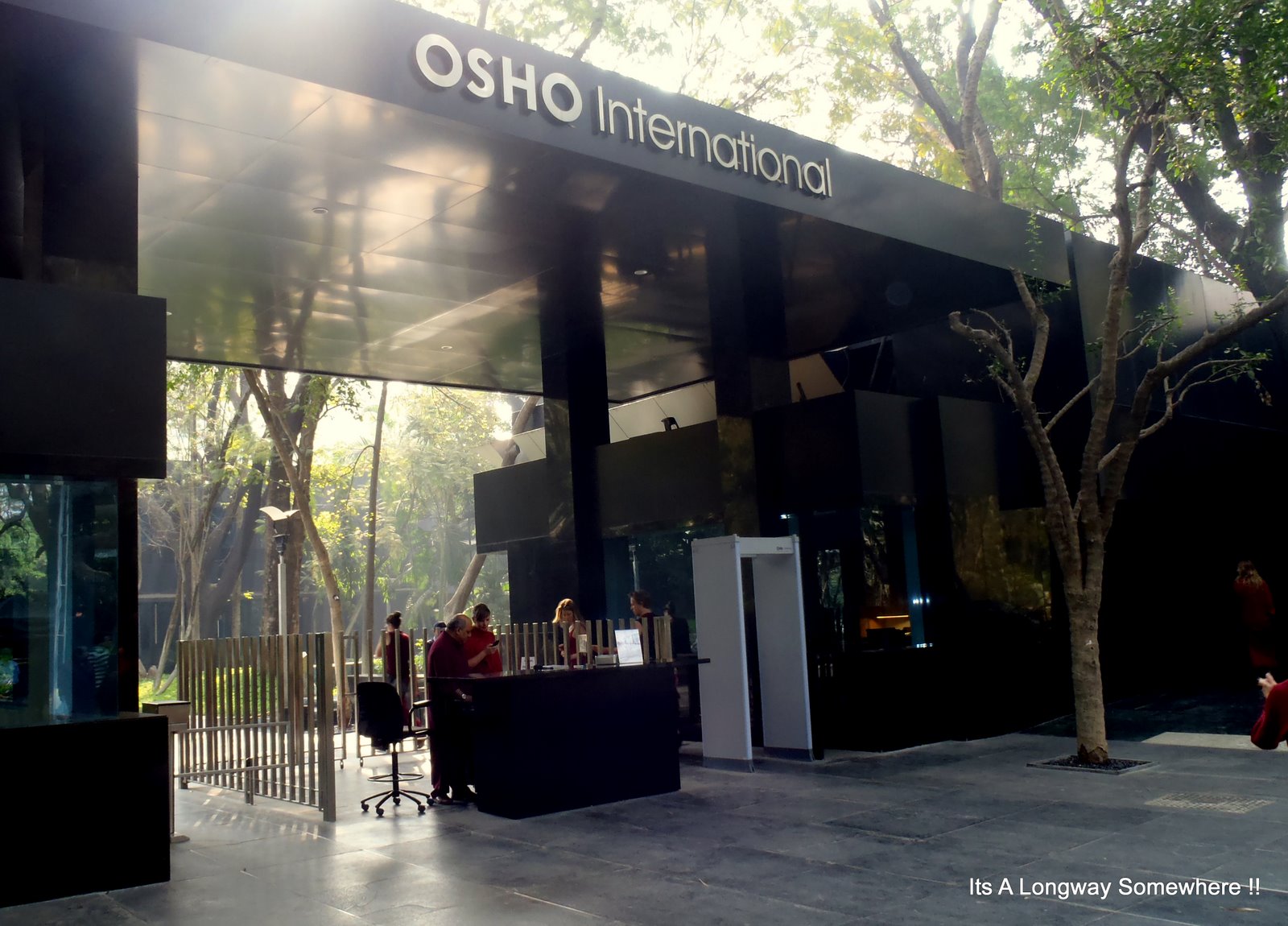 Bhagwan Rajneesh’s famous ashram is located at 17 Koregoan Park, a green and elite suburb of Pune. This site attracts thousands of visitors. The Ashram offers a variety of expensive courses on meditation.  Casual visitors can view a 45 minute video presentation and take a tour. The nearby Nulla Park also called Osho Teerth, is a beautifully maintained garden, transformed from a swamp, open for public from 6 to 9 am and 7 to 10 pm.

Built in 1736, Shaniwar Wada was once the palace of the Peshwa rulers. This historic seven-storied palace was built by Bajirao Peshwa I. During his days, it became the seat of political power and achieved tremendous importance. To this date, Shaniwar Wada has been the city’s main landmark.  One enters the palace through sturdy doors designed to dissuade enemy attacks. This palace is located in the narrow winding old part of the city. The palace is open from 8 am to 6.30 pm.

Architecturally amongst the best, just about a couple of kms from the Pune racecourse is the memorial of the great Maratha nobleman Mahadji Shinde. You can see the warrior’s painted silver likeness, swathed in a flame-colored turban and elaborate shawl. At his feet are the original prayer vessels, used to propitiate the family deity each morning. A sign asks you not to open an umbrella within the Chhatri’s precincts, as it would be an insult to the warrior’s memory.

A must see, this quaint building houses a fascinating collection of Indian artifacts collected by the late Shree Dinkar Kelkar. The 36 sections of the museum are used to display a wealth of antiques, carved palace doors, pottery, 17th century miniatures, a priceless collection of nut crackers, lamps, musical items, hookah pipes, hair drying combs and other such items from the Mughal and Maratha period. 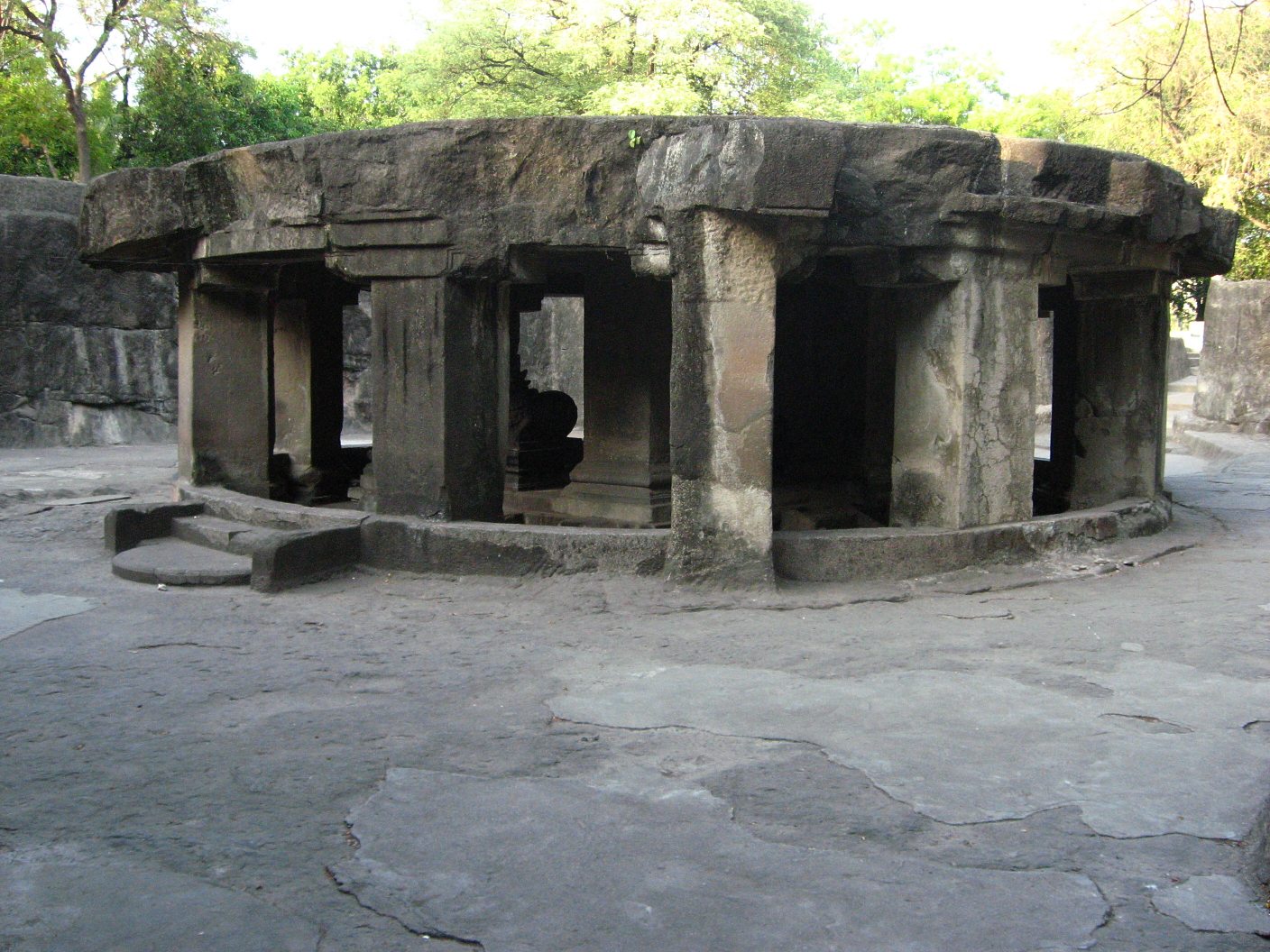 Hidden in the heart of the city in the Shivajinagar area is this 8thcentury rock-cut temple. Still in use, this temple, similar to the Caves at Ellora, has been painstakingly hewn from a single rock and includes massive pillars, a Shiva shrine and a Nandi bull.

The Tribal Museum documents the cultures of Maharashtrian communities, particularly those from the Sahyadri and Gondawana regions.

The gracious buildings with salons and suites standing amidst well laid out gardens is more than just a palace. It is a historical landmark. It was donated to India by the Aga Khan IV in 1969. During the 1942 Quit India Movement, Mahatma Gandhi was imprisoned here. On the grounds are the remains (samadhi) of Kasturba Gandhi, Mahatma Gandhi’s wife, who died here while in internment. 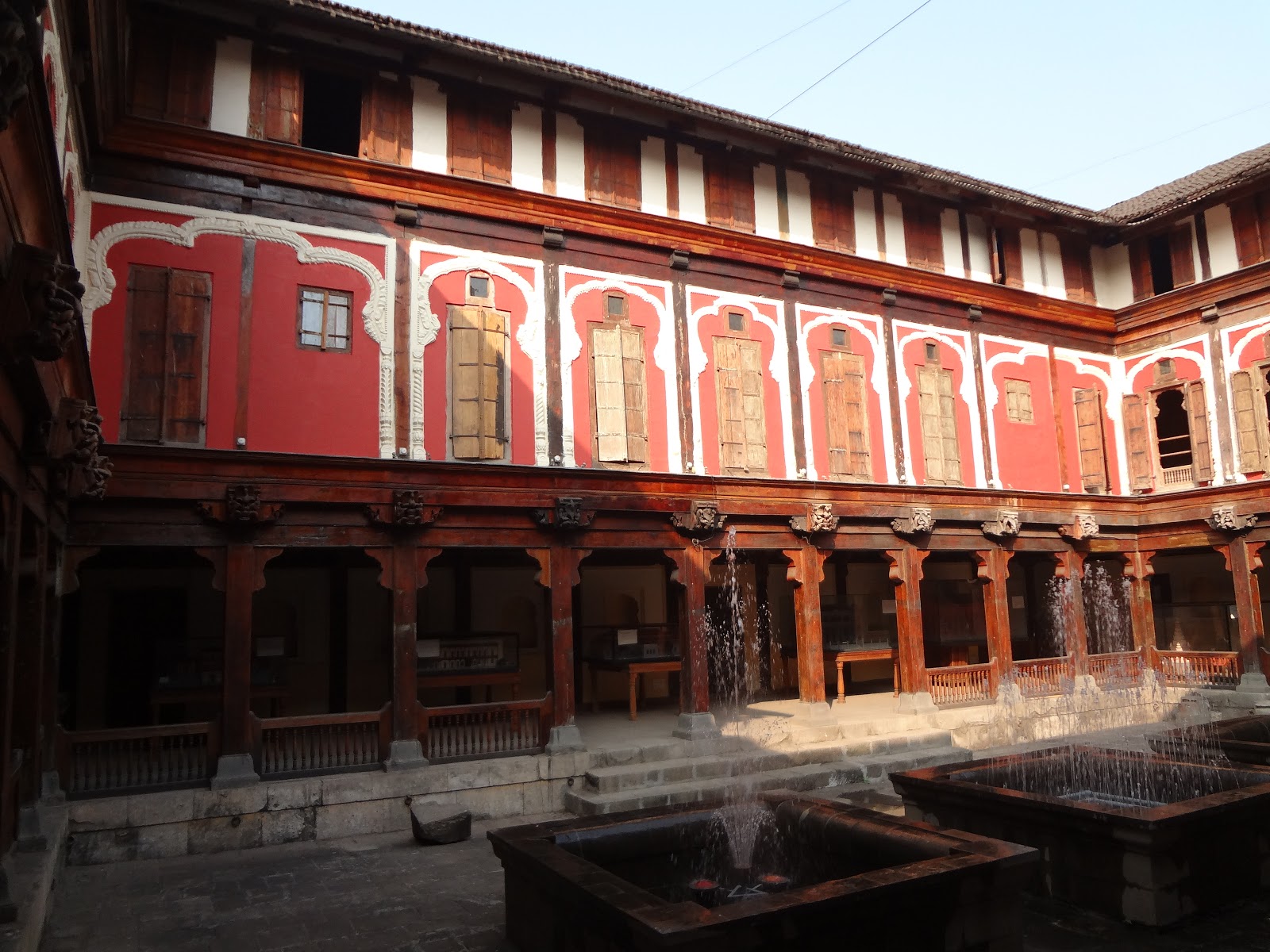 This is a three-storied mansion, known for its beautiful entrance and balcony with carved woodwork typical of the Peshwa period. The 260 ft long and 815 ft broad Teen-Chowki Wada was built by the last Peshwa, Bajirao II as his residence at a cost of Rs. 2 lakhs. The Wada’s eye-catching wooden facade is memorizing in its beauty, and has beautiful columns carved in the Suru form.

Bund Garden is located on the right bank of the Mula Mutha river, only a couple of kms north-east of Pune railway station. A stroll in the breeze and a cool evening boat ride in the back waters created by the ‘Bund’ on the river attracts many fun lovers. 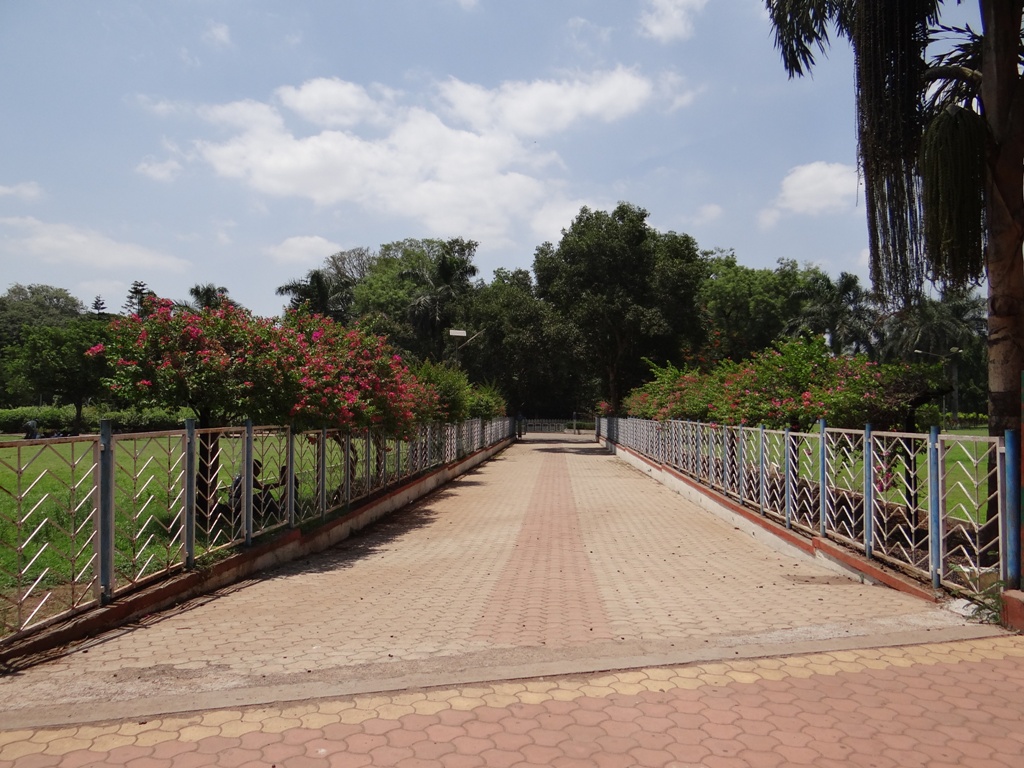 Evenings are best for a stroll through this beautiful garden that houses the famous Ganesh Temple on the top of a small hillock in the center. The temple was formerly surrounded by a lake, which has been fully reclaimed in the form of an open park, now a popular public place in Pune.

This famous landmark is located on the southern end of the city. A climb of 108 wide stone steps rewards you with a beautiful round view of the city and an invigorating draught of cool, fresh air. It also takes you to the group of four temples of Shiva, Ganesh, Vishnu and Kartikeya. The Parvati Temple used to be the private shrine of the Peshwa rulers. The Parvati Museum houses replicas of ancient paintings, old manuscripts, etc.

A zoo maintained by the Pune Municipal Corporation. It houses a variety of species of wild animals. The zoo offers a toy-train ride — a very special attraction for children, and boating facilities for the family.

Started in 1986 with the help of the Pune Municipal Corporation, the Katraj Snake Park is situated on the Pune-Satara Highway near Bharati Vidyapeeth Campus. The park today has a collection of wonderful reptiles, birds, a baby leopard, crocodiles and others.

Pune’ s oldest education institute is the Pune University formed in 1948. The university has many affiliated education institutes and colleges from all parts of Maharashtra — research institutes such as the National Chemical Laboratories, Centre for Development of Advanced Computing (CDAC), Gokhale Institute of Politics and Economics, National Institute of Virology (NIV)  are just to name few. The IUCAA, one of the pioneering institutes for research in astronomy, is located in the lush green environment of Pune University, and is headed by a world renown mathematician, Dr Jayant Naralikar.

Shopping in Pune can be quite an experience! There is nothing you won’t or cannot find here…you just have to have the eye for it! Pune with its blend of Indian and Western cultures is a paradise for all shoppers catering to each and every individual.

From branded goods to the traditional handicrafts or just some knick-knacks to dress up your home. Not to miss the chor bazaar, which is a haven for cheap stuff or Pune’s famed fashion street and Honkong lane, where a visit to browse for little trinkets which won’t last more than a wear is an interesting shopping experience by itself! So go ahead and let your purse strings loose!

They say the history and commerce of a city determines the image and its mould. Being the cultural capital of Maharashtra much can be attributed to the majestic history of this place, which has given the country leaders like Shivaji and Lokmanya Tilak. One of the prime getaways from Pune are the hills and the forts around it.

There are a number of interesting historical sights a short distance out of Pune that can be seen over a few days, if you plan your time right.

The charm of this quaint city of Pune is around it in the forts, the caves and the other adventurous treks around the little mountains and hillocks! Some of these sights have great relevance in the history of the Marathas.