The Land of Kings – RAJASTHAN

Home The Land of Kings – RAJASTHAN

The state of Rajasthan emerged after Partition from a mosaic of twenty-two feudal kingdoms, known in the British era as Rajputana, “Land of Kings”. Running northeast from Mount Abu, near the border with Gujarat, to within a stone’s throw of the ruins of ancient Delhi, its backbone is formed by the bare brown hills of the Aravalli Range, which divide the fertile Dhundar basin from the shifting sands of the mighty Thar Desert, one of the driest places on earth.

A flamboyant showcase of Rajasthani architecture, JAIPUR has long been established on tourist itineraries as the third corner of India’s “Golden Triangle”. At the heart of Jaipur lies the PinkCity, the old walled quarter, whose bazaars rank among the most vibrant in Asia, renowned for their textiles and jewellery. For all its colour, however, Jaipur’s heavy traffic, dense crowds and pushy traders make it a taxing place to explore, and many visitors stay just long enough to catch a train to more laidback destinations further west or south. If you can put up with the urban stress, however, the city’s modern outlook and commercial hustle and bustle offer a stimulating contrast to many other places in the state.

It’s attractions fall into three distinct areas. At the heart of the urban sprawl, the historic Pink City is where you’ll find the fine City Palace and the Hawa Mahal along with myriad bazaars stuffed with enticing Rajasthani handicrafts. The much leafier and less hectic area south of the Pink City is home to the Ram Niwas Gardens and Central Museum, while the city’s outskirts are dotted with a string of intriguing relics of royal rule, most notably Nahargarh Fort, the cenotaphs at Royal Gaitor, and the temples (and monkeys) of Galta.

On the eastern fringe of the Thar Desert, JODHPUR, dubbed “the Blue City” after the colour-wash of its old town houses, huddles below the mighty Mehrangarh Fort, the most spectacular citadel in Rajasthan, which dominates the cityscape from atop its huge sandstone plinth.

Blue originally denoted a high-caste Brahmin residence, resulting from the addition of indigo to lime-based whitewash, which was thought to protect buildings from insects, and to keep them cool in summer. Over time the colour caught on – there’s now even a blue-wash mosque on the road from the Jalori Gate, west of the fort.

Jodhpur was once the most important town of Marwar, the largest princely state in Rajputana, and now has a population of around a million. Most people stay just long enough to visit the fort, though there’s plenty to justify a longer visit. Getting lost in the blue maze of the old city one will stumble across Muslim tie-dyers, puppet-makers and traditional spice markets, while Jodhpur’s famed cubic roofscape, best viewed at sunset, is a photographer’s dream.

In the remote westernmost corner of Rajasthan, JAISALMER is the quintessential desert town, its golden, sand-coloured ramparts rising out of the arid Thar like a scene from the Arabian Nights. Villagers dressed in voluminous red and orange turbans still outnumber foreigners in the bazaar, while the exquisite sandstone architecture of the “Golden City” is quite unlike anything else in India.

The streets of Jaisalmer are flanked with numerous pale honey-coloured facades, covered with latticework and floral designs, but the city’s real showpieces are its havelis, commissioned by wealthy merchants during the eighteenth and nineteenth centuries. 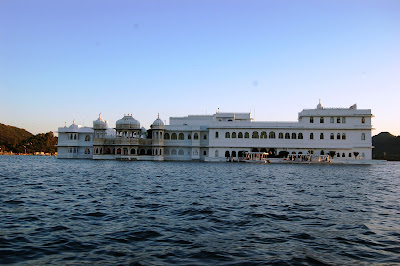 Spreading around the shores of the idyllic Lake Pichola and backdropped by a majestic ring of craggy green hills, UDAIPUR seems to encapsulate India at its most quintessentially romantic, with its intricate sequence of ornately turreted and balconied palaces, whitewashed havelis and bathing ghats clustered around the waters of the lake – or, in the case of the Lake Palace hotel and Jag Mandir, floating magically upon them. Not that the city is quite perfect. Insensitive lakeside development, appalling traffic along the old city’s maze of tightly winding streets and vast hordes of tourists mean that Udaipur is far from unspoilt or undiscovered. Even so, it remains a richly rewarding place to visit, and although it’s possible to take in most of the sights in a few days, many people spend at least a week exploring the city and the various attractions scattered about the surrounding countryside.

Northwest of Jaipur, the land becomes increasingly arid and inhospitable, with farms and fields gradually giving way to wind-blown expanses of undulating semidesert dotted with endless khejri trees and isolated osed in stockades of thorn. Having grown rich on trade and taxes, Shekhawati’s Marwari merchants and landowning thakurs spent their fortunes competing with one another to build the grand, ostentatiously decorated havelis that still line the streets of the region’s dusty little towns – an incredible concentration of mansions, palaces and cenotaphs plastered inside and out with elaborate and colourful murals.

The site was the capital of the Hadachauhans, 25 years before neighbouring Kota, Bundi never amounted to more than a modest market centre, and remains relatively untouched by modern development. The palace alone justifies a visit thanks to its superb collection of murals, while the well-preserved old town, crammed with crumbling havelis, picturesque old bazaars and a surprising number of flamboyant baoris or “step-wells” (giant water tanks designed to collect the precious monsoon rains), makes this one of southern Rajasthan’s most appealing destinations – a fact recognized by the ever-increasing numbers of foreign tourists who are now visiting the place.

The first major settlement one will come across is the historic town of CHITTAURGARH (or Chittor). Of all the former Rajput capitals, Chittaurgarh – former capital of the kingdom or Merwar before Udaipur – was the strongest bastion of Hindu resistance against the Muslim invaders and it is home to one of Rajasthan’s most spectacular and historic forts, rising majestically above a verdant tapestry of plains. No less than three mass suicides (johars) were committed over the centuries by the female inhabitants of this honey-coloured fort. Some visitors squeeze a tour of Chittaurgarh into a day-trip, or en route between Bundi and Udaipur, but it’s well worth stopping overnight to give plenty of time to explore the fort properly.

No Indian nature reserve can guarantee a tiger sighting, but at RANTHAMBORE NATIONAL PARK the odds are probably better than anywhere else: the park is relatively small and the resident tigers are famously unperturbed by humans, hunting in broad daylight and rarely shying away from cameras or jeep-loads of tourists. Combine the big cats’ bravado with the park’s proximity to the Delhi–Agra–Jaipur “Golden Triangle”, and one will understand why Ranthambore attracts the number of visitors it does.

With more than eighty thousand visitors a year, Ranthambore is one of India’s most popular national parks and can get ridiculously busy throughout the cool winter months, especially around Diwali and New Year. The summer months from April to June are a lot quieter, but obviously very hot. There are currently around forty adult tigers in the park, plus healthy populations of chital, nilgai, jackals, leopards, jungle cats and a wide array of birds. The original core section of the national park is flanked by three bufferzones, designed to provide space for the park’s ever-expanding number of young territory-seeking tigers.

It is India’s premier birdwatching sanctuary – an avian wonderland that attracts vast numbers of feathered creatures thanks to its strategic location, protected status and extensive wetlands. Keoladeo is probably best known for its stupendous array of aquatic birds, which descend en masse on the park’s wetlands following the dramatic arrival of the monsoon in July. These include the majestic saras crane and a staggering two thousand painted storks, as well as snake-necked darters, spoonbills, white ibis and grey pelicans. There are also various mammals in the park, including wild boar, mongoose, antelope, jackal, jungle cat, chital, nilgai and sambar.

The bustling city of BIKANER has little of the aesthetic magic of neighbouring Jaisalmer, Jodhpur or Jaipur, but is worth a visit thanks to the impressive Junagarh Fort, as well as for the chance to explore its atmospheric old city, dotted with a rich array of quirky, early twentieth-century havelis. Near to town are a government camel-breeding farm and the remarkable world-famous rat temple at Deshnok.

Rajasthan’s only bona fide hill station, MOUNT ABU is a major Indian resort, popular above all with honeymooners who flock here during the winter wedding season (Nov to March) and with visiting holiday-makers from nearby Gujarat. It is aimed squarely at these local vacationers rather than foreign tourists, but the sight of lovestruck honeymooners shyly holding hands and jolly parties of Gujarati tourists on the loose lends the whole place a charmingly idiosyncratic holiday atmosphere quite unlike anywhere else in Rajasthan – and the fresh air is exhilarating after the heat of the desert plains. During the peak months of April to June and at almost any major festival time (especially Diwali), and even during weekends, the town’s population of thirty thousand mushrooms, room rates skyrocket, and peace and quiet are at a premium.

At the centre of town, Nakki Lake is popular in the late afternoon for pony and pedalo rides. Of several panoramic viewpoints on the fringes of town above the plains, Sunset Point is the favourite – though the hordes of holiday-makers and hawkers also make it one of the noisiest and least romantic. Honeymoon Point, also known as Ganesh Point (after the adjacent temple), and Anadhra Point offer breathtaking views over the plain at any time of day, and tend to be more peaceful.

Rajasthan, the land of princes and warriors like Rana Pratap Singh, the arid Thar desert, colorful cotton cloths, beautiful architectures like the Hawa Mahal, the largest state of Republic India, the land which boasts of being part of the Indus Valley Civilization is a land of very spicy food – spicy, flavory and very aromatic food.

This land is characterized by scarcity of water, scarcity of fresh green vegetables and hence most of the dishes are prepared in such a way that they can be stored for a couple of days. Lentils, pulses and gram flour are used in abundance. Dry fruits, dried vegetables, spices, yoghurt and ghee are used much in common. Most foods are cooked in milk than in water.

Rajasthan’s extravagant palaces, forts and finely carved temples comprise one of the country’s richest crops of architectural monuments. But these exotic buildings are not the only legacy of the region’s prosperous and militaristic history. Rajasthan’s strong adherence to tradition is precisely what makes it a compelling place to travel around. Swaggering moustaches, heavy silver anklets, bulky red, yellow or orange turbans, pleated veils and mirror-inlaid saris may be part of the complex language of caste, but to most outsiders they epitomize India at its most exotic.