5 Dinosaur Species We’d Love to Have in a Zoo If I’d list down all their species then that would be more than a hundred thousand, so diverse was the kingdom of this terrestrial reptile. Since quite enough we have been conjured up by the aura of that one mosquito bite which could bring that vogue extinct race back to the world’s terrene. So what if it actually happens? would we risk it or not i don’t know so avoiding that dispute  and taking you to those ten esteemed dinosaurs out of way so many that people fancy and would like to have in that kind of park. Archaeopteryx, from the late Jurassic Period, may be the earliest known theropod dinosaur which may have had the capability of powered flight. IfArchaeopteryx is defined as an avian, then there are few non-avian avialans. Avialae is the only clade of dinosaurs containing their only living representatives, birds, and the most immediate extinct relatives of birds.  Similar in size and shape to a European Magpie, Archaeopteryx could grow to about 1 metre  in length. Despite its small size, broad wings, and inferred ability to fly or glide,Archaeopteryx has more in common with small theropod dinosaurs than it does with modern birds. In particular, it shares the following features with the deinonychosaurs (dromaeosaurs and troodontids): jaws with sharp teeth, three fingers with claws, a long bony tail, hyperextensible second toes (“killing claw”), feathers (which also suggest homeothermy), and various skeletal features. The features above make Archaeopteryx a clear candidate for a transitional fossil between dinosaurs and birds. Thus, Archaeopteryx also plays an important role not only in the study of the origin of birds but in the study of dinosaurs. The animal was the size of a turkey and could weigh as less as 0.26g and lived around 150 million years ago in what is now Europe. It is the smallest known dinosaur.  Compsognathus is one of the few dinosaurs for which the diet is known with certainty: the remains of small, agile lizards were found preserved in the bellies of  specimens. Although not recognized as such at the time of its discovery, Compsognathus is the first dinosaur known from a reasonably complete skeleton and the smallest and the closest supposed relative of the early bird Archaeopteryx. Thus, the genus is one of the few dinosaur genera to be well known outside of paleontological circles. A. fragillimus is the largest and heaviest dinosaur ever discovered. A. fragillimusmay have been the longest known vertebrate at 40–60 meters (131–196 ft) in length, and may have had a mass of up to 122 metric tons. Whatever evolutionary pressure caused large size was present from the early origins of the group. Carpenter cited several studies of giant mammalian herbivores, such as elephants and rhinoceros, which showed that larger size in plant-eating animals leads to greater efficiency in digesting food. Since larger animals have longer digestive systems, food is kept in digestion for significantly longer periods of time, allowing large animals to survive on lower-quality food sources. This is especially true of animals with a large number of ‘fermentation chambers’ along the intestine which allow microbes to accumulate and ferment plant material, aiding digestion. 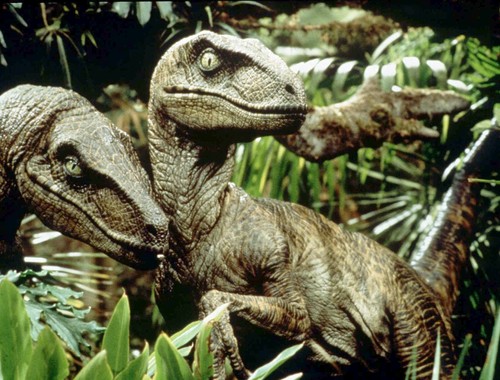 Velociraptor (commonly shortened to ‘raptor’) is one of the dinosaur genera most familiar to the general public that existed approximately 75 to 71 million years ago. Velociraptor was a mid-sized dromaeosaurid, with adults measuring up to 6.8 ft long, 1.6 ft high at the hip, and weighing up to 15 kg. The skull, which grew up to 9.8 in long, was uniquely up-curved, concave on the upper surface and convex on the lower. The jaws were lined with 26–28 widely spaced teeth on each side, each more strongly serrated on the back edge than the front—possibly an adaptation that improved its ability to catch and hold fast-moving prey. It was a bipedal, feathered carnivore with a long, stiffened tail and an enlarged sickle-shaped claw on each hindfoot, which is thought to have been used to kill its prey.Velociraptor can be distinguished from other dromaeosaurids by its long and low skull, with an upturned snout. T-Rex, yes we can’t forget the dinosaur king for obvious reasons. It was among the last non-avian dinosaurs to exist. It lived throughout what is now western North America, 7 to 65.5 million years ago. Like other tyrannosaurids,Tyrannosaurus was a bipedal carnivore with a massive skull balanced by a long, heavy tail. Relative to the large and powerful hindlimbs, Tyrannosaurusforelimbs were small, though unusually powerful for their size, and bore two clawed digits. Although other theropods (a dinosaur subclassification) rivaled or exceeded Tyrannosaurus rex in size, it was the largest known tyrannosaurid and one of the largest known land predators, measuring up to 42 ft in length, up to 13 ft tall at the hips, and up to 6.8 metric tons (7.5 short tons) in weight. By far the largest carnivore in its environment, Tyrannosaurus rex was an apex predator.