Most Mind Bending Movies Ever Made!!

Even though Matrix Reloaded and Revolution were disappointing to say the least, one cannot make a list about the most mind-bending movies of all time without including the Wachowski siblings’ seminal sci-fi epic The Matrix. It’s almost an ode to the world’s of philosophers, futurists, and sci-fi nerds alike.

The Matrix, in the literal sense, is film designed to mess with your mind. The essential plot of the film is that the 1999-world we believe to be real is actually a grand façade created by these malevolent sentient machines to keep humans in a concentrated cyber world while they harness our bodies for fuel to keep up their campaign for total global domination.

Simply watching the green code flow down your screen is enough to confuse even the most confident of moviegoers, but watch it enough and you’ll understand the basis of the Wachowskis’ goal to bring your attention to yet another possibility of human extinction via man-made machines.

I’m sure I’m not the only one who think this, but Leonard DiCaprio deserved an Oscar for his performance in Martin Scorsese’s Shutter Island. In this movie, DiCaprio plays a U.S. Marshall who goes to Shutter Island–a mental psychiatric facility for the worst of the criminally insane (something like American Horror Story Asylum–with his partner Mark Ruffalo to investigate the supposed disappearance of one of the patients. Throughout this journey to find the missing patient, DiCaprio comes to terms that he in fact might be a patient on the island; and all of this was some elaborate plan to get him to admit it to himself. But in the end, he believes he’s being kept against his will.

In this mind-bending masterpiece the audience must ask themselves is, “Is he really insane?” 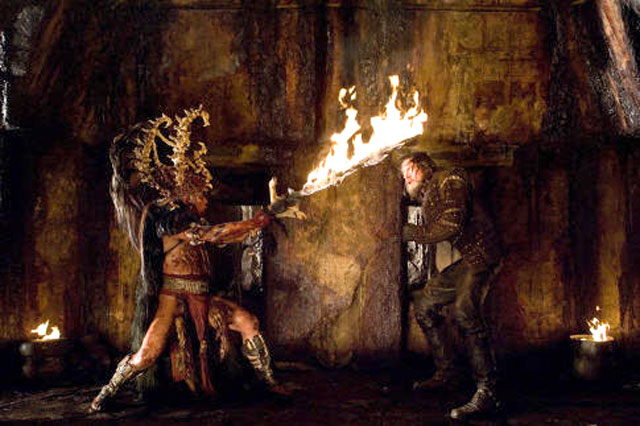 A truly inspirational film about life, love, death, and acceptance of the inevitable desp

ite any and all extreme measures one will take to change the outcome of any circumstance. Darren Aronofsky blends the worlds of science fiction, fantasy, and religion in The Fountain; about a man, Thomas, is separated into three eras with three different lives: 16th century Spain during the inquisitions in which Thomas is a soldier; the present day in which he is a scientist; and the 26th century in which he is an astronaut.

In all three lives, Thomas is hell bent on discovering the cure to his wife’s illness before she succumbs to her impending death. As his journey comes to an end, he finally grasps the idea that is life and its harsh finale, death.

ETERNAL SUNSHINE OF THE SPOTLESS MIND

Charlie Kaufman and Michel Gondry created a sci-fi romantic film that bends the hearts and minds of anyone who watches Eternal Sunshine of the Spotless Mind. As the protagonist, Joel Barish, tries to erase all the memories of his ex-girlfriend from his mind after she erases all her memories of him from her mind, we are shown a world in which memories of the two collide and are re-experienced as they disappear into pure nothingness in this mind-bending multi-layered world that is the mind.

Though Christopher Nolan is known for his Dark Knight trilogy and the mind-bending Freudian concept that is Inception, Memento is still one of his greatest works that tends to go overlooked. In this, Guy Pearce plays Leonard Shelby, a man who was shot and then proceeded to lose the ability to store short term memories; so he goes about his life writing notes to himself through tattoos and pictures.

Viewers are shown the constant struggle of Shelby to find the man who murdered his wife and forced that chaotic lifestyle of his that is amnesia. To witness this, Nolan and his brother treat audiences with the mind-boggling concept of reverse chronological order that is not-so-surprisingly enough to baffle viewers from the get-go.

No matter how many times I see this movie, I am still in awe of the geniuses the Nolan brothers are to come up with such a mind-bending plot only to surprise viewers time and time again.

0
47
A fan of art,cinema,music and whatever is beautiful. currently a student. Creativity and innovation always draws me towards it. i am the one who reads books,hears music take pictures explore places and does whatever gives peace and pleasure and shares it .